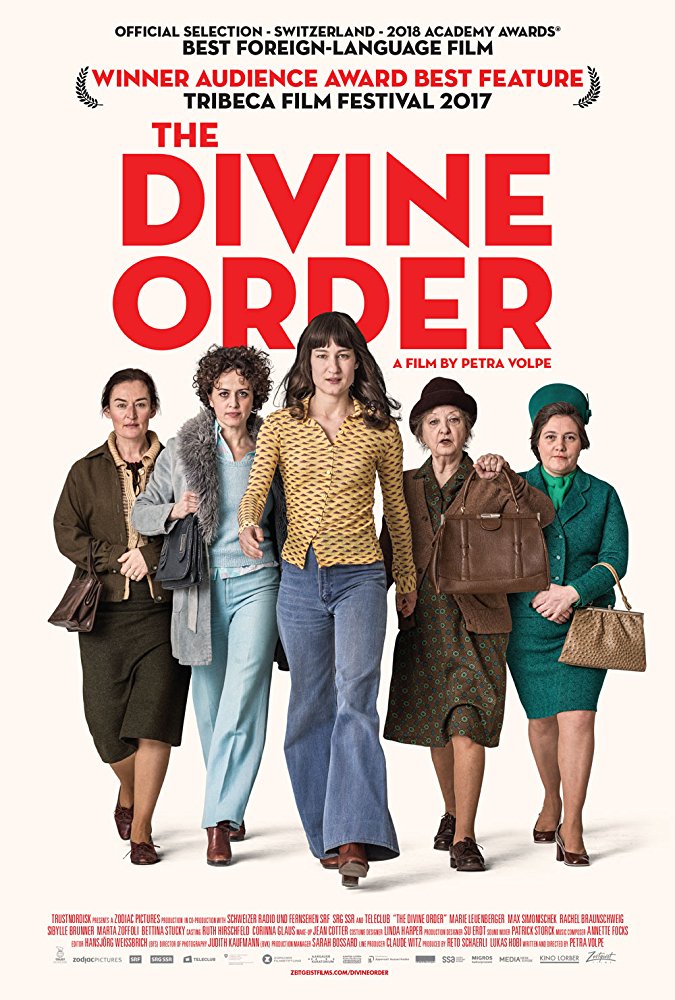 The Divine Order is an absorbing look at women’s rights in Switzerland. That’s an understatement. The surprise here is that in a country so advanced in many ways, women couldn’t vote or work without permission from their husbands until 1971 as opposed to Americans who won that battle in 1920. The fun here lies in the story of life in the modern era. As we watch this fine movie unfold, we absorb the attendant frustrations and obstacles that ruled the lives of women as recently as the 1970s. They cooked, they cleaned, they served, and they lived within societal rules.

After Nora (Marie Levenberger) takes her husband to his bus stop and her children to school, she returns to her life of cleaning the house, doing laundry, preparing dinner, and vacuuming around her father-in-law who, with great generosity, lifts his feet so she can vacuum beneath them while he continues to read his newspaper.

The couple brings on an estrangement from their daughter by forbidding her to see her long haired boyfriend; they end up sending Hanna to a detention home. “We need to protect her from herself,” her father says. Though Nora is a capable, dutiful wife who resists the approach of the Women’s Liberation Group, the seeds of her frustration finally lead her to listen.

Nora begins to read and even to convince husband Hans (Maximilian Simonischek) who is afraid people will think he doesn’t earn enough to provide for her. She slips into the new wave of thinking offered up to her by a movement founder. She buys new clothes, gets a haircut, and applies for a job. Still uncomfortable, but now head of The Action Committee she joins the protestors in Zurich with banners proclaiming, “Women’s rights are human rights.”

Marie Levenberger creates in Nora an intelligent, if careful woman who awakens gradually to the prevailing injustices as she becomes a leader. Maximilian Simonischek’s Hans loves her dearly and in a quiet way represents the populace as he begins to understand the importance of her message. Marta Zaffoli is terrific as the persuasive firebrand who spurs the movement. Sibylle Brunner is the spicy older woman who knows they must win and Rachel Braunschweig – as Nora’s sister – all hit just right notes in a film with few flaws.

Two things make this movie jump alive. Petra Volpe has written and directed a strong description of a modern country late to embrace women’s rights while the cast hits a uniformly credible tone of waking a country from a deep sleep. In a marvelous addendum, we watch crowds of women awaken to what they have been missing in personal physical pleasure in a country devoted to propriety.

For a country that was late to the voting party, they were ahead of America in being willing to talk publicly about physical pleasure as a right for women. This brought the excitement of the voting booth right into the bedroom. Hats off to Petra Volpe.