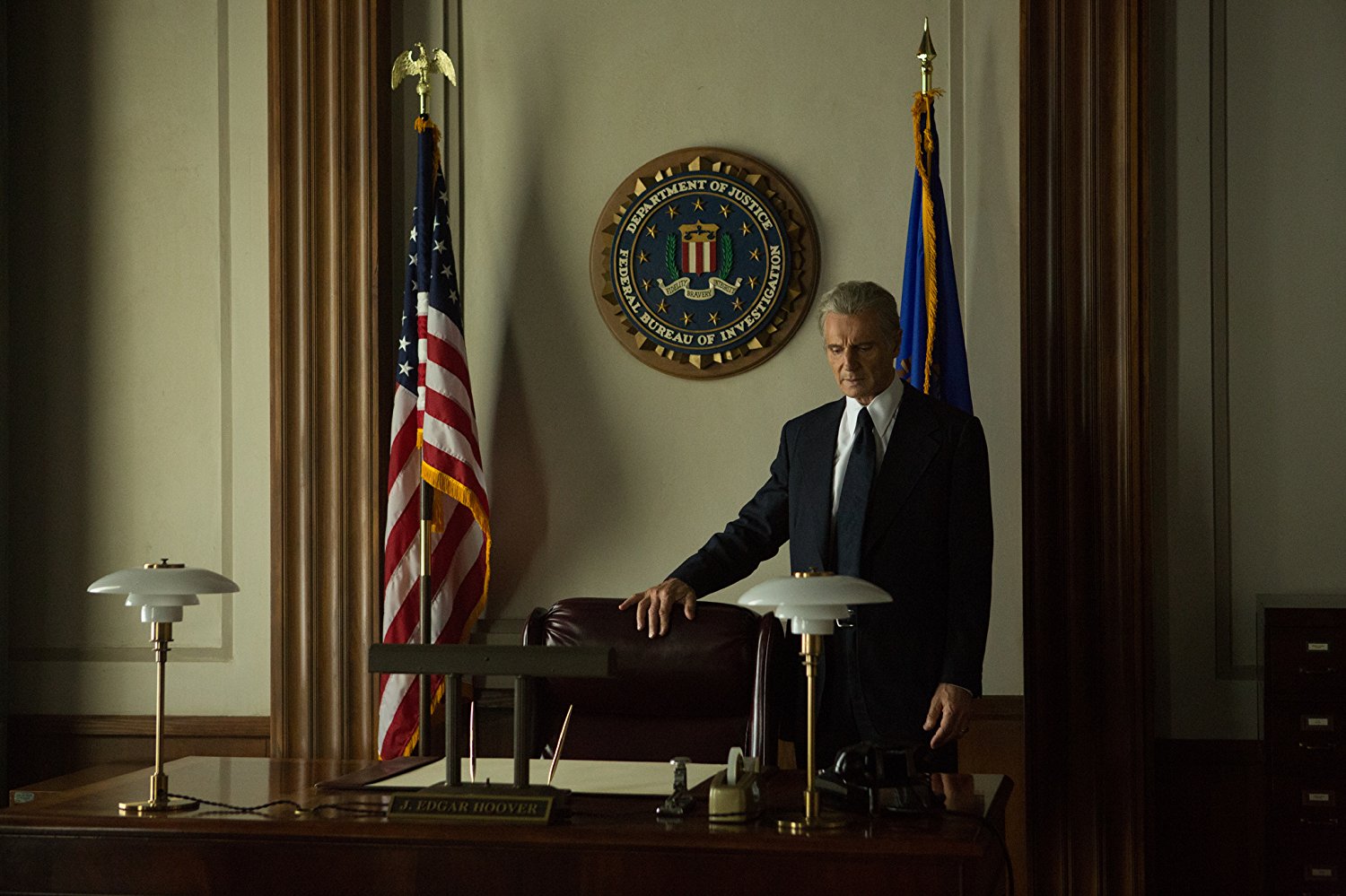 Mark Felt is a beautifully crafted movie about the role of secret agent Deep Throat in the 1974 resignation of President Richard Nixon. It can be hard to follow for people who were very young at the time. If you were uninterested back then, you may be bored. If you were, as I was, riveted by the unfolding story, you may be fascinated by a superbly controlled performance by Liam Neeson. This is an absorbing piece of American history.

For nearly fifty years as head of the FBI, J. Edgar Hoover kept deeply personal files on public figures to the point where presidents, movie stars, and businessmen dared not cross him for fear of exposure. When Hoover died in 1972, Deputy Mark Felt (Liam Neeson) expected to be promoted to the job after his own thirty years in the bureau.

His hopes were crushed when Richard Nixon became president and appointed his own loyalist, L. Patrick Gray as chief of the FBI. When the multiple crimes of the Nixon administration began to leak out, Gray did all he could to discover who in the bureau was passing the facts to the Washington Post. It was, of course, Mark Felt, labelled Deep Throat by Bob Woodward of the Post. Felt passed information to Woodward in absolute secrecy that was maintained until he revealed his identity in 2005.

Nixon and his White House staff were running burglaries, illegal wiretaps, and money laundering. Mark Felt passed the proof to the Washington Post’s Bob Woodward who published it as he assembled evidence. Few will forget the day Richard Nixon resigned and boarded a plane in shame with the same wave of his arm he had always used in victory.

The strength of this movie is the genuinely interesting picture of Felt’s values and character as he brought down a presidential administration that was awash in multiple crimes. Liam Neeson captures the sadness of a loyal, smart man denied his promotion by the very people he was investigating. The actor has a compelling grasp of Mark Felt, the loyal FBI man who was watching the White House puncture the system.

Neeson shows Felt’s anger through a determination to discover and to end White House corruption. Honest to the core, he suffers not just from losing the head job at the FBI but from having his new boss be a Nixon loyalist. Neeson paints a portrait of a man loyal to country and to his organization, a husband and father capable of tenderness but locked in the fight to expose Richard Nixon’s crimes. As Felt’s wife Audrey, Diane Lane paints a woman who lives in isolation in the same house as her preoccupied husband.

This is an intricate story – often hard to follow – of complex personalities and rivalries with an honorable man at its center. If you were alive and interested in its unfolding in the ‘70s, you’ll be fascinated; if not it’s one valuable history lesson.