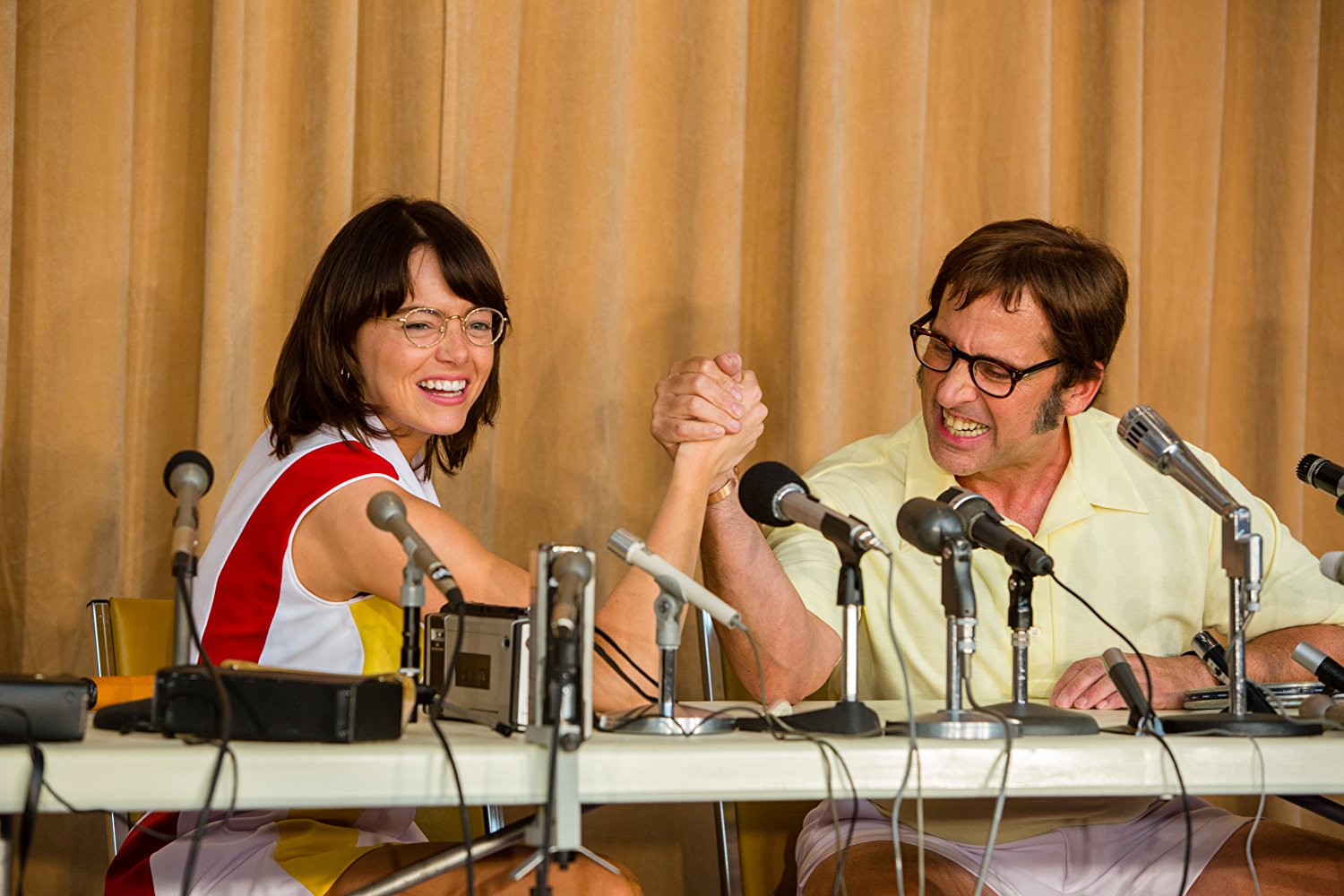 The significance of the 1973 Billie Jean King/Bobby Riggs tennis match wasn’t as obvious then as it is now. Those of us who watched it back then thought of it as a joke crafted by Riggs to promote himself after the end of his tennis career. King understood perfectly that if she won, her victory would be a big step forward in equal treatment for women in pay and in attitude. Her victory was a landmark step even though four decades later, women are still fighting for equality.

Men earned as much as eight times what women did in professional tennis and were astonished when anyone suggested that was unfair. Billie Jean King believed that if she could beat Riggs in this match that was infused with serious intent along with comic foolery she could change the treatment of women.

Emma Stone and Steve Carell create King, Riggs, and the tone of their time with marvelous perception. Riggs had won Wimbledon three times and hated every minute of trying to live a normal life after tennis. Steve Carell captures the feisty guy who loved gambling and drinking. He decided to challenge the women’s champion, beat her, and confirm that women must stay where they belong and he would wrap it all up as comedy.

Emma Stone is terrific as she captures both the determination and the doubts King feels as she accepts Riggs’ challenge. She wants equality in pay and recognition for women, two goals ridiculed by men in tennis and business. Ninety million viewers watched her beat Riggs in three sets. At stake was the beginning of the Women’s Liberation movement of that era.

New poignancy is added to the story by revelation of their private lives. King was married to a kind, supportive man (Austin Stowell) when she met Marilyn Barnett (Andrea Riseborough), an attentive hairdresser who became, against King’s better judgement, her lover. Riggs was married to Priscilla (Elizabeth Shue) a rich woman who supported him in the style he loved.

In a strong supporting cast, Natalie Morales creates Rosie Casals as a tough, outspoken ally for King’s decisions. Jessica McNamee gives us a nasty Margaret Court, and Bill Pullman creates a thoroughly unpleasant Jack Kramer who represents every man in the world who believes women belong in the kitchen and the bedroom. In a welcome addendum, we are given short, welcome statements about the turns their lives took after that match in 1973.

Though the battle starts with Riggs’ wrapping himself in a joke to recreate himself, the serious issues are all right there. Emma Stone is superb as she shows us the toll exacted on Billie Jean King as she made the world understand that women were about to emerge from the kitchen. We hear “Someday we will be free to be who we are and love who we love.” Forty some years later, that day has still not arrived. Jack Kramer would be pleased.