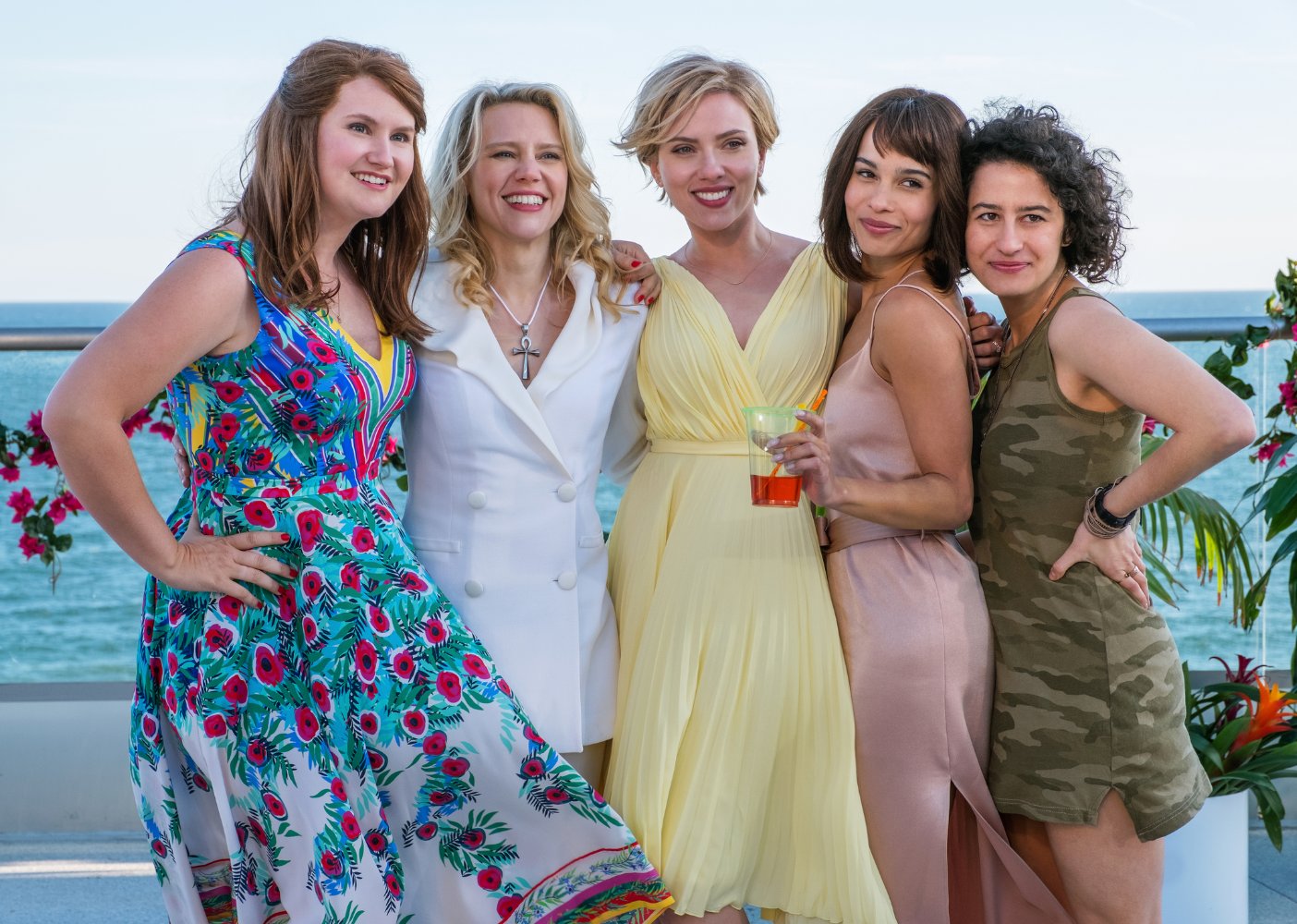 Welcome to the newest contribution to the summer junk movie culture. Rough Night is a ridiculous movie but in one way it is a groundbreaker. After decades of movies that make fun of women, this one upends custom (and censorship) by making men the subject of derision. Although this may not be what you’ve been waiting for, it whacks male movie dominance by simply reversing the insult system.

So what is Rough Night’s gift to our culture? Jess (Scarlett Johansson) and Peter (Paul W. Downs) are about to be married. Peter’s ushers have gathered in the quiet dignity of a wine tasting evening. Jess’s old friends have been summoned by Alice (Jillian Bell) for a night-before-the-wedding bachelorette party, their first gathering since high school. The language, gestures, and set-ups are in female hands now while men who cross their paths during this evening are doomed – in one way or another.

Alcohol, cocaine, drunk in the hot tub, a dead guy confined in a sex swing, making love to a dead man, inspecting an unconscious cop. Although the whole thing is ludicrous, we can acknowledge that the women who made this one had decades to make up for. Women have been targets forever. The one major involuntary laugh here is the sight of one man naked beneath a body hugging outfit tailored to his shape. He looks as dumb and silly as women as objects have seemed for years.

The big question: does the cast rescue the preposterous material? Of course not. They do their best but the simple truth is that it’s just not possible. Scarlett Johannsson wends her way through the farce with a modicum of dignity. Paul W. Downs wins our sympathy as her fiancé and we know they will be happy once this terrible evening is over. A gentle salute goes to Kate McKinnon who manages to be slightly funny with her Australian accent. Ilana Glazer and Zoe Kravitz play a couple considering a renewal of their high school relationship. This cast has succeeded in making themselves look as silly as the men who long ago invented raunch for their bachelor parties.

The only thing that comes close to sophisticated cruelty here is that the women inflict the humiliation with male cool. No giggly girl stuff, just cold, calm uncaring behavior at the expense of others. For all its silliness, it changes the movie culture by turning men into objects.

But that said, isn’t there a genuine question to be asked about whether unfunny sight gags and labored jokes are worth the trip when ticket prices are exorbitant and the movie is basically stale? The lesson here may just be that pre-wedding behavior parties are pretty old stuff whether women or men are the goats. This all sounds preposterous, and it is just that, but it will be remembered as the awful movie that triggered the reversal of male/female comic clichés. It’s a female chorus howling “Gotcha!”