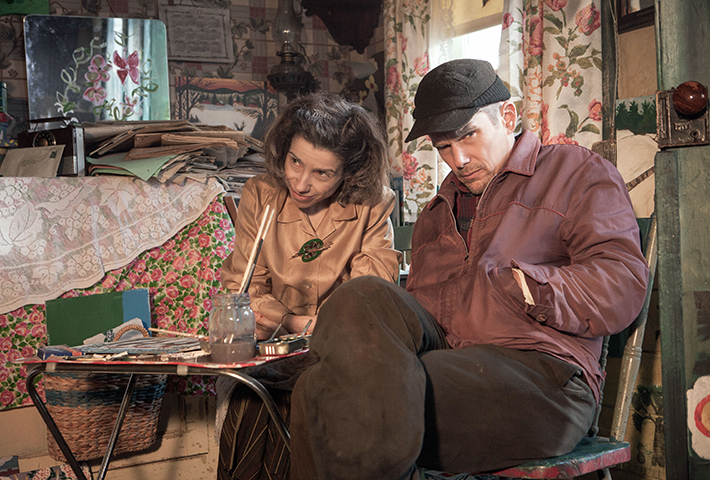 Maudie is a beautiful piece of art that offers the perfect alternative to summer blockbusters. Director Aisling Walsh took elements from the work of writer Sherry White and stirred them gently until the whole quite literally silenced the theater. The elements: two astonishing performances by Sally Hawkins and Ethan Hawke, stunning photography of the empty countryside, and the deep sensitivity of director Walsh.

Sally Hawkins’ Maude is a woman in her mid-thirties who carries the physical effects of early onset arthritis and an early childhood illness that left her with a stooped posture. Fragile she may be, but she is otherwise sharp, shy, and uncommonly stubborn. Her brother (Zachary Bennett) has left her in the care of her poisonous Aunt Ida (Gabrielle Rose). Desperate to escape, Maud presents herself at the ramshackle house of fish peddler Everett Lewis (Ethan Hawke) in answer to his advertisement for a maid.

Their prickly relationship develops through ups and downs as Maud paints pictures of all the bits of nature she sees on her walks. Her flowers will cover the walls, the stair risers, mirrors and all paintable surfaces in their house. In a relationship rooted in need, neither is willing to change. He gives her shelter and she keeps it clean. She has the freedom to paint the world around her as she sees it. He has a clean house and the uncluttered time to sell fish and firewood.

The needy couple walks separately and sometimes together along miles of a dirt road to town for the few supplies they can afford. It is then that director Walsh works more magic. The two on that endless road are small dots against the majesty of the landscape (Nova Scotia, but filmed in Newfoundland). Walsh’s camera teaches us quietly that no one in this area has money or material things. The glory of the landscape is not theirs to enjoy but to survive. With her silent camera, she captures the stark nature of their relationship along with the poverty imposed by the vast landscape. She never teaches. She simply gives us the beauty of the story in the quietest way. We are watching the power of serious creativity.

When Maud’s paintings begin to sell while Everett takes over a bit of her housework, she says quietly: “we’re like a pair of old socks.” In the simplicity of their surroundings, the only change will be the tenderness that creeps into their lives. Otherwise nothing changes the fact that they deal in basic necessities and with whatever lies unexpressed in their heads on those long, long walks. Maud sees the golds, reds, and whites that will become her flower paintings, Everett can’t say anything right, but we know he has mellowed just a little.

We watch two fine actors who absorbed all the subtleties used by their director. Together the three took us to a faraway place both physically and emotionally, and it’s a place we will all remember.