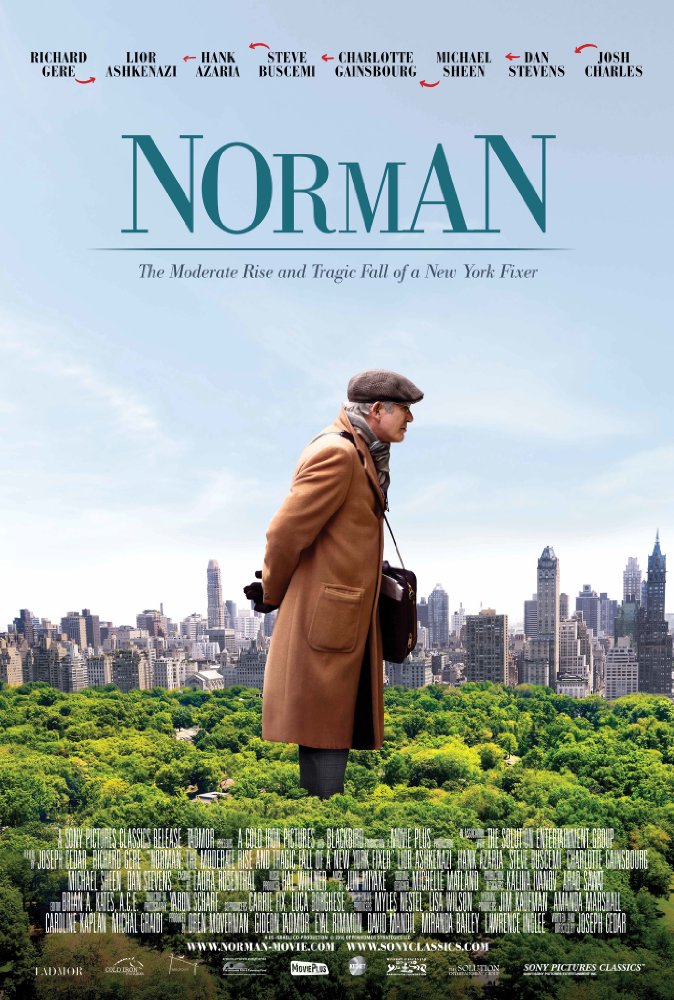 Norman belongs to Richard Gere and his astonishing portrait of a New York City hustler. Add to that the rare sophistication of the filming and musical score created by director Joseph Cedar and his production team. In perfect collusion with the star, the musical background speaks for Norman when he is silent, almost as if the music is reading his mind.

Norman Oppenheimer appears to be without a home, family, or friends. He connives his way through life by plotting on park benches, on cocktail napkins in bars, and while wandering the streets of New York. The early scenes may test your patience while the film takes its time showing us that he has not one thing on his mind but his next victim. Who can he find to use? Hang in, because the last third of this movie is nothing less than brilliant.

Next victim? That would be Eshel (Lior Ashkenazi) a good Israeli/politician/lawyer who is down on his luck at the moment. The two men meet by chance in New York in front of a shoe store window where Eshel finds an expensive pair of shoes he loves. Rifling through his head full of possible deals, Norman buys the shoes for Eshel as a gift. When Eshel becomes Prime Minister of Israel, Norman Oppenheimer is just a few steps behind. He pulls out his cocktail napkin diagram of contacts and worms his way into Israeli politics with all the ugly plans he designs as he goes. For a short while we watch Norman become a figure in the political intrigue of the new Prime Minister

We know that the hustler’s tools are boasting and exaggeration of what he can do. In an odd coincidence, this movie opens at the same time that respected banks and brokerage houses are making the headlines of the Wall Street Journal with their newly exposed hustling of their own customers. Access is the name of every hustler’s game.

What lifts this movie way beyond the ordinary is director Joseph Cedar’s skill in setting Richard Gere loose to wander through surroundings that are designed as an artful, musical painting while Gere delivers a superb, nearly silent performance of his own creation. He does all this against a unique and powerful background that has itself become a character in the story. He walks silently through streets and buildings while opening his mind for us to read. No words needed.

In an admirable portrait of a life built on artifice, the supporting cast is excellent. Credit Steve Buscemi as the Rabbi, Charlotte Gainsbourg as Alex, Dan Stevens as Bill Kavish among a large number who support the central player as he walks through a life of delusion. Joseph Cedar blends these actors with new technology to create a story about a fellow we can’t admire. Result: just try taking your eyes off the screen as Richard Gere turns an unpleasant story into a brilliant portrait of a loser.