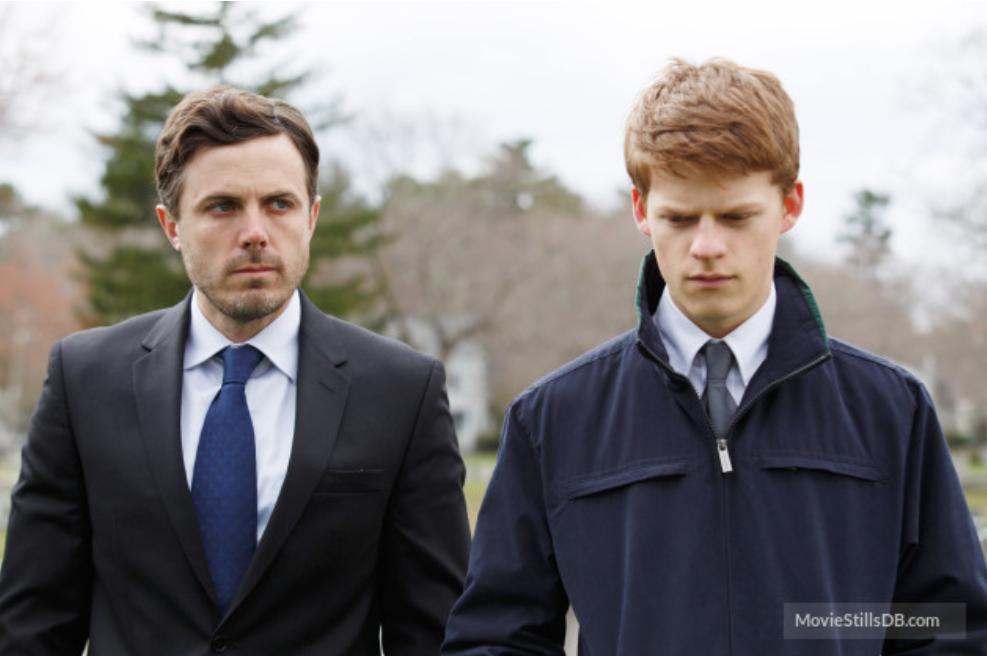 When you see Manchester by the Sea, give yourself plenty of time to sink into its pace and its beauty. Writer/director Kenneth Lonergan has made an art form of the characters and the landscape and you need patience to appreciate how he delivers on those levels.

The movie opens on a fishing boat where Lee Chandler (Casey Affleck) is playing with his small nephew Patrick while his brother Joe (Kyle Chandler) pilots the boat . This will be a recurring memory for Lee as his life turns dark. When Lee is told his brother has died of a heart attack, he is living in a one room apartment while earning his living as a man of many trades – plumber, carpenter, physical fixer.

He leaves immediately for Boston where he finds he is responsible for Joe’s son Patrick, the little boy we saw on the boat in the first scene. Patrick (Lucas Hedges) is now sixteen. As Lee struggles with arrangements, we meet his former wife Randi (Michelle Williams in a short but heart stopping performance). We learn only through flashbacks why Lee is the broken, fumbling man we are watching in real time.

This is not a movie that has a plot. It is instead the story of the effects of an earlier tragedy on one man and throughout the story, we in the audience wonder in silent curiosity whether he will ever recover. He is a man consumed by grief, forced to do things he has never done before. Will his new responsibility to his nephew become a path for his own healing? Whatever happens, Lee is a barely controlled explosion waiting to erupt.

Director Lonergan sets a slow pace for his film, all the better for us to absorb the role of the landscape around Beverly, MA, and the town of Manchester by the Sea. By lingering on waves, snow, wind, and cold, he delivers the essence of the long winters in those seaside towns.

Lonergan shows us also how life moves on around a sad death. When Patrick’s father dies, Lee realizes that despite the sorrow, the boy is a teenager who has band practice, a series of girlfriends, and hockey practice. As we watch their relationship grow and falter by turns, it becomes obvious that Lonergan’s gift to us is a lingering sense of person and of place.

Casey Afleck paints an indelible portrait of a man limited partly by his nature, partly by circumstance and he does it without ever breaking character. His performance is genuine and consistent. Lucas Hedges is a gifted young actor who will be around for a long time. Affleck, Hedges, Williams – not one of them breaks the serious, depressed mood created by death. Kenneth Lonergan has created for these fine actors a sense of time, place, and culture that affects each of them as they deal with the one unspeakable tragedy that affected the whole family long ago.