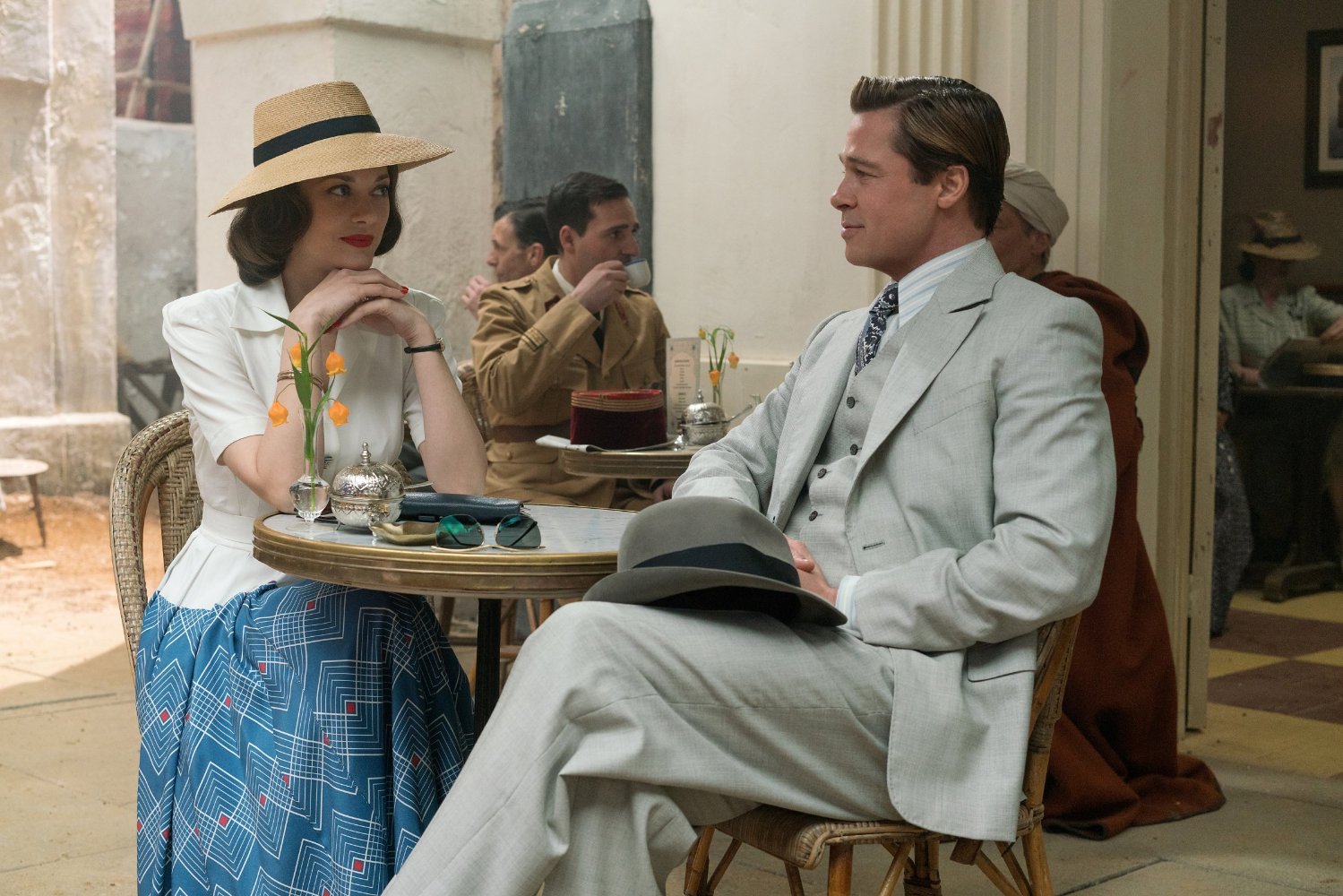 Allied is an odd mix of touching moments and bad judgement. It offers a sub/middling performance by Brad Pitt and a warm, sophisticated one by Marion Cotillard who has to put all the punch in their relationship. But let’s start at the beginning.

Premise: Intelligence officer Max (Brad Pitt) is to meet French Resistance figure Marianne (Marion Cotillard) in order to play a husband/wife team who will murder the Nazi ambassador during an elegant wartime reception in Casablanca. For just a second we wonder if there might have been an easier way for him to get there than by parachuting into the Moroccan desert.

Director Robert Zemeckis and writer Steven Knight deserve no forgiveness for what they do to this promising World War II premise. An enormous cast creates party goers, soldiers, pilots, Nazis, and dead bodies but all of them are presented in contemporary detail and language.

The focus is on Pitt and Cotillard as they try to convince the Nazis that they are married lovers. Here’s the tough part: Watching Pitt isn’t easy. He is simply too wooden to carry the romantic lead. We root for him, hoping his stone face is simply a reflection of his serious assignment, but no, he’s just plain stiff. Put a gun in his hand or a cliff to jump off and he becomes slightly more animated though still ruinously contemporary.

Cotillard, carrying the movie opposite Pitt’s cardboard figure, does a fine job of creating a spy clever enough to fool both the Allies and the Nazis. She can convey deep emotion with the slightest change in expression, and that is the key to her role here as a possible double agent.

Suddenly they are married with a baby back in wartime England where Max is faced with the accusation that Marianne may be a spy. Pitt comes alive just a little as he tries to prove her innocence.

The major problem here is cultural error in the silliest of ways. Behavior and language in the supporting cast are not remotely rooted in 1943. Example: fu….g was a mere verb back then, not the dominant adjective of today and its frequent use here plants the movie firmly in today’s culture. Nor is it possible to believe a modern poster boy as a spy in the war that shook the world more than seventy years ago. And Brad Pitt as a linguist?

It is all too obvious that Director Robert Zemeckis (age 65) and writer Steven Knight (57) haven’t bothered to do the research that could have brought WWII alive on the screen. The movie they have made has few roots in the 1940s, and that’s a shame because they had a good plot. As it is, older audience members are often close to laughter – or resentment – while younger ones are denied the chance to soak up an important piece of history. The problem? The audience really wants to like it and can’t.