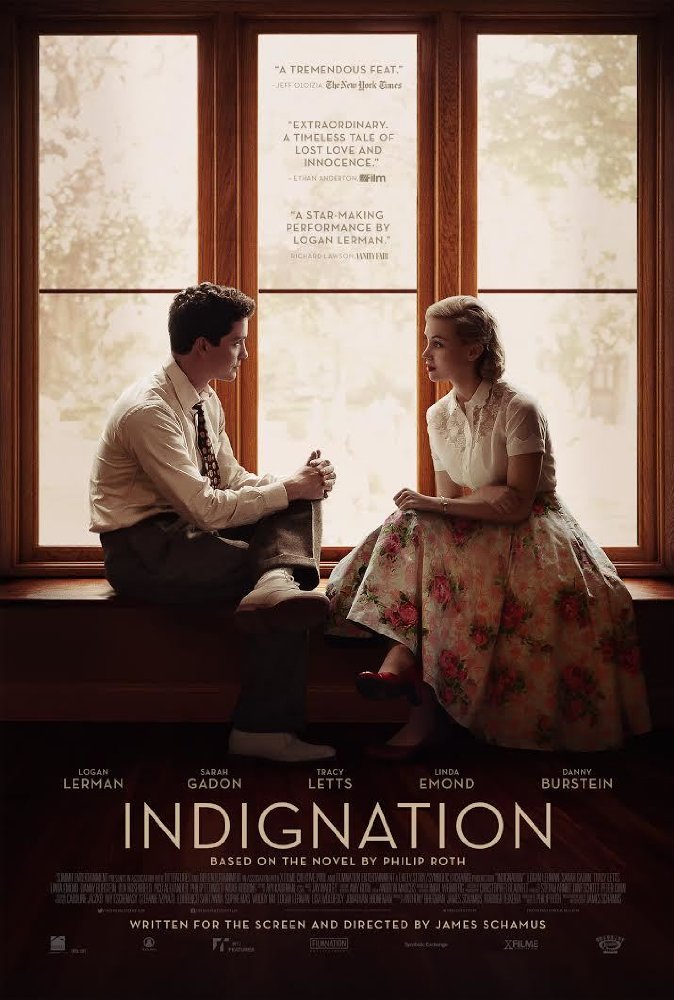 Indignation is a flawless take on the travails of a family in 1951, that odd post war decade when people held their thoughts and feelings inside and spoke in a careful kind of social code that hid the reality of who they actually were.

Director/scriptwriter James Shamus has wrapped his movie perfectly in the unexciting decorum, fashions, and interiors that were so characteristic of the post WWII era before America began to spiff itself up. He has done it so well that white haired audience members may well shiver in grim recognition.

The framework: Esther and Max Messner (Linda Emond and Danny Burstein) have watched their academic whiz of a son graduate from high school and win acceptance to a conservative college in Ohio. That accomplishment wins him an exemption from the draft that is taking many classmates to the Korean War. Marcus (Logan Lerman) can’t wait to leave his suddenly overbearing father who is in a state of despair over losing his son to the real world. At college, the young academic gets two difficult roommates who drive him to his decision to move to an upstairs single room in an old building.

Enter Olivia (Sarah Gadon) an apparently self-possessed – until we know better – student who sees Marcus’ intelligence and uses sexual pleasure to get close to him. Perfectly dressed in the manner of the day, she hides her own problems and her past from a boy who surely could have shared her sadness. For most of the film the two are awash in misunderstanding – he the emotional innocent, she the initiator who tries to break through his reserve. In keeping with the culture of the time, both are unable to convey what’s really in their thoughts and hearts.

Enter Dean Caudwell (Tracy Letts) who summons Marcus in order to find out why he is so unhappy. In a stunning take on a ‘50s academic, this dean and the troubled student engage in an extended conference where neither says what he means. Tracy Letts gives us a perfect rendering of the stultifying code of the day.

When finally pushed to the edge, Marcus explodes – articulately of course – with his beliefs. It is Logan Lerman’s grand performance that shows us the inhibition of the time – and of its inevitable doom. He captures the intelligence and strength of a young man who won’t be put down. With equal talent, Danny Burstein creates a father broken by having to bury his raw emotion while Linda Emond as his wife tries valiantly to make life work for her family.

If only Marcus had lived a decade later, his insights might have been applauded. Instead, this bright teenager was marked as a problem. Was the emptiness a result of one generation standing dutifully aside for the men returning from WWII? Certainly we were inviting the culture of the next decade to blow away our deadening caution. The ‘60s would do just that.