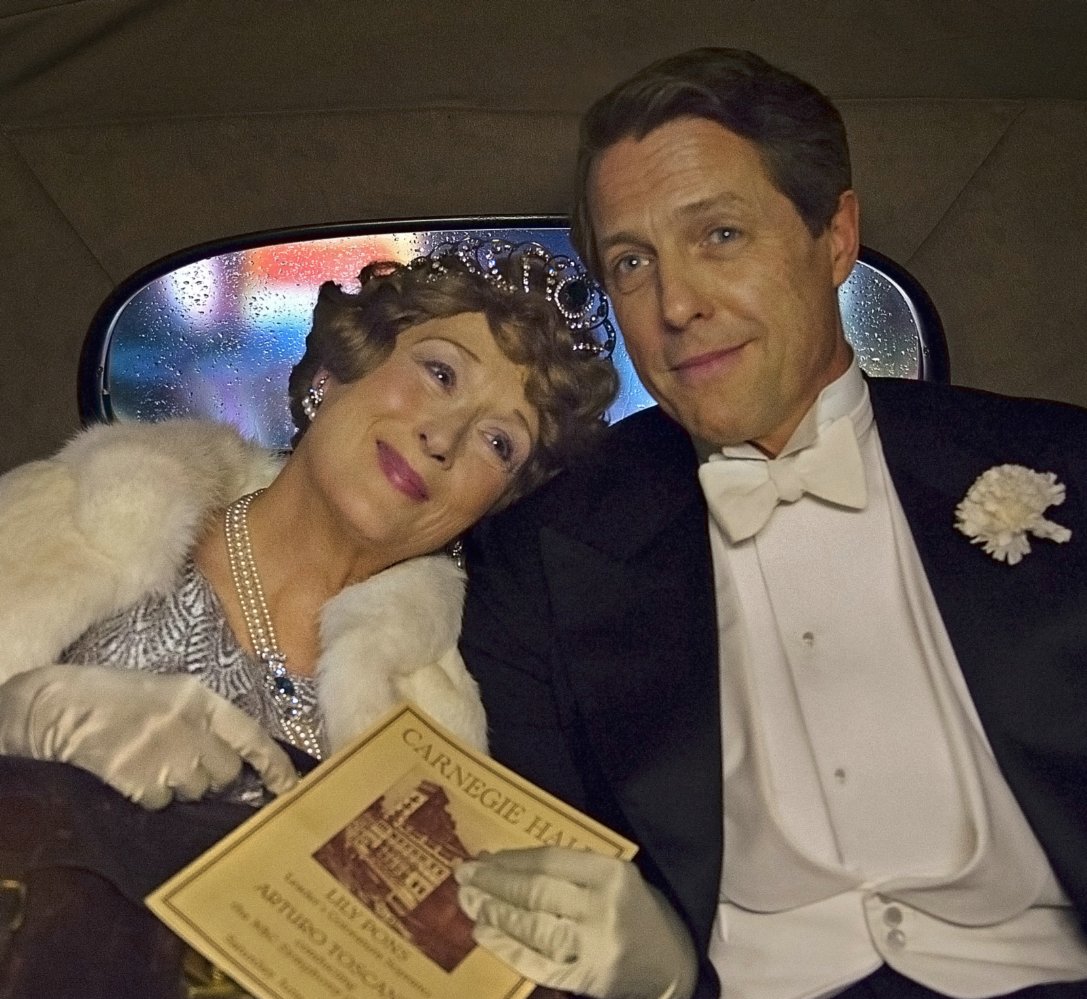 If Florence Foster Jenkins had been made by a lesser cast it might well have made a bad joke of its central character. In the hands of Meryl Streep, Jenkins becomes a complex combination of an endearing passion for music and a dismal inability to sing. The fact that this story is true generates a protective feeling in the audience. How can we laugh at someone whose intentions are so fine? But laugh we do because Streep’s skillful off key singing is genuinely funny and accurate according to historical recordings. At the same time, Jenkins’ honorable intentions and her love of singing opera make us sad. We laugh but we care.

Jenkins was an enormously rich New York heiress whose passion for music led her to support all kinds of deserving musical enterprises. And when that wasn’t enough, she created new ones – her social musical group, her appearances as a comic extra in musicals – all raised money for her cause. Only when she sang her favorite opera solos herself did she become a joke. She was tone deaf. In a protective mode impossible in today’s instant communication, her husband shielded her from the press and public and made sure she performed only to audiences that appreciated her loyalty to New York’s musical world. In 1944 Jenkins achieved her dream of appearing at Carnegie Hall. As grim as that may sound, you will be surprised at what happened.

As we watch Hugh Grant play the protective husband, St. Clair Bayfield, we wonder all the while whether his loyalty is real or given in exchange for his keep. Grant’s performance is shot through with subtleties that keep us guessing. It’s a rich piece of acting from a man we often underestimate.

Because the whole thing was filmed in England and Scotland, a grand handful of British actors make sure we feel the sadness that underlies the comedy. Now add two more standout performances that generate genuine appreciation. One is by Simon Helberg as Cosme McMoon, the young, ambitious pianist Florence hires to accompany her. His behavior, coming straight from the heart, is never selfish, never mean. Another is a comic triumph with a twist by Nina Arianda who plays the up-from-the nightclubs wife of a businessman. As St. Clair’s mistress, Rebecca Ferguson makes St. Clair’s second life understandable.

This is a grand cast that manages to play with our emotions in the best of ways. It is quite a feat to bring an audience to tears of genuine sympathy and in the next moment have them howling with laughter without meanness. Credit director Stephen Frears with guiding these actors to work with great subtlety on a fine script by Nicholas Martin.

It’s hard to imagine anyone but Meryl Streep being able to create – with compassion – this woman who until 1944 wove a world of musical magic in her protected part of New York and then in her dreams became its star.