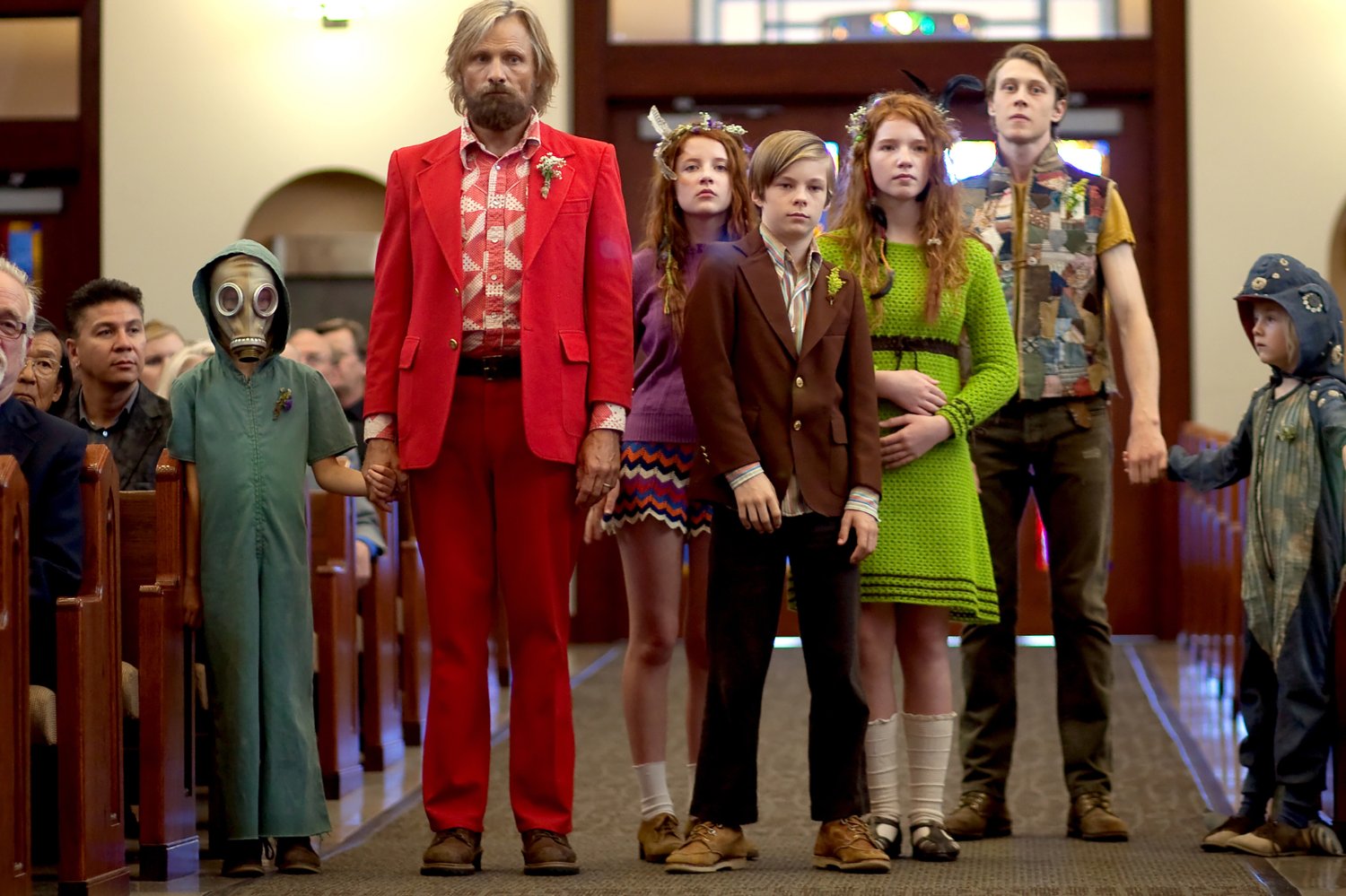 Let’s get one thing out of the way. Captain Fantastic is the most inappropriate title of the year and chances are it has kept audiences away from a serious movie that deserves to be seen. If you are a person who loves to explore ideas as a path to growth, you may well be fascinated by this story. If you are a person who instinctively and always wants to defend your own beliefs, you might well be annoyed by some of the extremes it presents.

The story opens in a cavern of green wilderness in the mountains of the Pacific Northwest. A deer is eating leaves in his paradise and we tense immediately at the inevitable. The scene introduces us to Ben (Viggo Mortensen) who is teaching his many children how to feed themselves in the wilderness where they live without contact with people or towns. Writer/director Matt Ross takes just fifteen minutes to sketch their happy family life before getting into complications.

In their time off from their father’s training sessions, the family reads The Brothers Karamazov, Middlemarch, and other books that line their outpost. They are absorbing their education without the distractions that lure so many in the culture that is the nation’s common currency. Though Father Ben is a demanding academic, the family’s down time is full of fun and dancing to the music of two guitars played by Ben and an older son.

With their mother Leslie (Trin Miller) sick in a hospital in New Mexico near her parents and the older boy showing signs of wanting to know a wider world, we see the changes that are about to visit this family. When finally they travel on their bus to their mother’s funeral, we watch them trying to deal with the real world their parents rejected. Look for a characteristically fine performance by Frank Langella as Ben’s father-in-law and fine acting by George MacKay and Nicholas Hamilton as two of the boys who signal change.

If you bring an open mind to both their wilderness world and the culture they were shielded from, you will have a grand time sifting through your own preconceptions. Don’t be put off by Viggo Mortenson’s lapses into exaggeration. That’s his way of putting an exclamation point after his character’s beliefs.

The best part of this story is that there are no villains for us to dislike. That leaves us free to ask ourselves questions. Is it fair to shield our young from what we ourselves dislike most in the society around us? Should one man shape his children’s world in his own image? Is it fair to insist that our way is the right way? Or do we try to instill honesty and respect in the hope they will make wise choices on their own? Isn’t there arrogance in thinking we know what the right way is for all of them? These questions are the movie’s gift to its audiences.