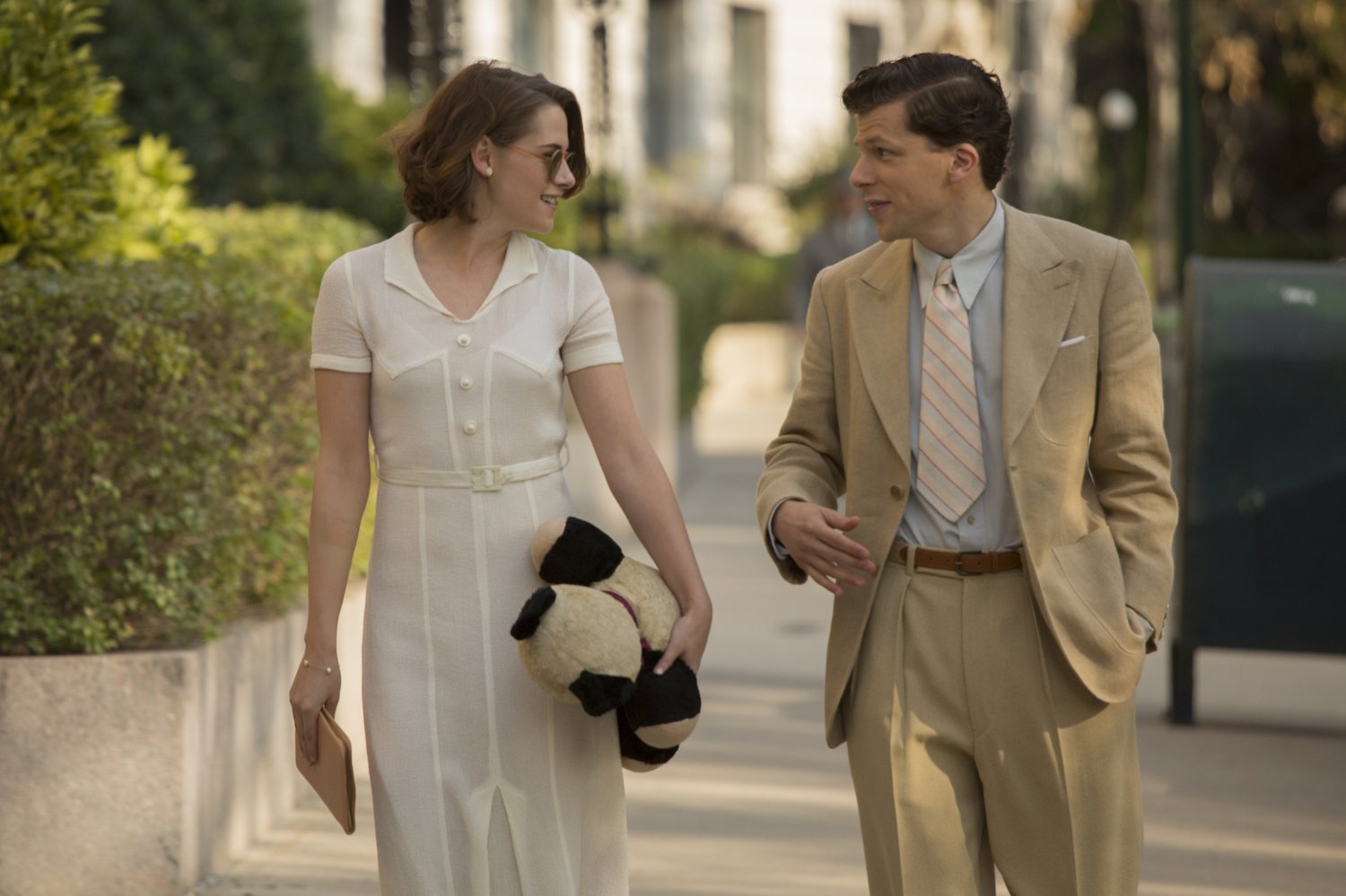 Café Society – Woody Allen’s 47th movie – has been released to a public that has rarely been neutral about the man or his work. Discussion about each of his annual films usually breaks down into fans, naysayers, and an inarticulate segment that dismisses him for various reasons. But do they go? You bet they do – millions of them. This year’s entry is a challenging mix of his strengths and weaknesses.

The plotline: a shy boy from the Bronx who is sick of his difficult family heads to Hollywood where he falls in love with the secretary to his uncle who is a big time agent to Hollywood stars. Will the uncle give him a job? Will the love affair last?

In its strongest sections, the movie opens and closes in New York where a classic Woody Allen family of nutcases sits around the dining room table babbling without listening. Bobby (Jesse Eisenberg) knows he needs to get out and announces his departure for Hollywood to ask his powerful Uncle Phil (Steve Carell) for a job.

He falls immediately for Vonnie (Kristen Stewart), Uncle Phil’s secretary while doing menial office tasks. After complications develop, he heads back to New York where we return to the iconic family dinner table while Bobby moves up as an impresario in the nightclub world. And he meets Veronica (Blake Lively).

Those strengths and weaknesses? Woody Allen has teamed here with Vittorio Storaro who has done a quietly magnificent job of lighting the Hollywood and New York segments so beautifully that we wish we could push a stop action button just to stay longer in each scene. He turns everything into a painting.

The casting? That’s the problem. Allen tries to deliver 1930s Hollywood glamour by having Steve Carell’s thoroughly unconvincing power agent reel off the names of the stars of the era in stilted conversations designed to show his power. We need short film clips so young people can imagine Joan Blondell, Spencer Tracy, Joan Crawford, James Cagney, Sam Goldwyn, and other dozens who gave the era its flavor. They are simply names on a staccato list designed to elevate Steve Carell’s Uncle Phil. It doesn’t work, not for a minute. It’s an easy guess that Allen’s disgust for Hollywood is as deep as his love for New York.

While Jesse Eisenberg is appealing as the shy boy, his insurmountable problem lies in playing opposite both Kristen Stewart and Blake Lively. These two thoroughly accomplished, sophisticated actors try mightily to subdue themselves for Eisenberg, but can’t. He is too young for their classiness even when he polishes himself up in the later nightclub scenes.

The women, including Jeannie Berlin as Bobby’s marvelous Woody Allenesque mother, overwhelm the men even as they underplay their characters, and that’s because Jesse Eisenberg and Steve Carell, good as they have been in other roles, are miscast in these. Of course, you’ll see it anyway – and you’ll be glad you did.