Writers and Their Words 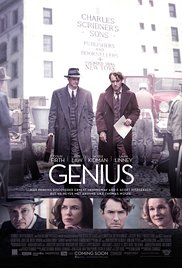 Genius is not for everyone. Set in a rain-soaked Manhattan during 1929, the film is at times as dark as its surroundings. Carefully faithful to two excellent biographies of Scribners
editor Maxwell Perkins, it will absorb some – as it did me – and lose others. If you do go, make the effort to transport yourself to the time and place when a legendary editor at a top publishing house was editing the work of Scott Fitzgerald, Ernest Hemingway, and the new young author Thomas Wolfe.

The core of the movie develops from the moment the unknown Wolfe (Jude Law) brings his new manuscript of more than a thousand pages to Max Perkins (Colin Firth). Perkins, drawn to the work from the first page, begins the long process of cutting and editing it for certain publication. His love of the manuscript is beautifully conveyed in voiceover excerpts as he reads quietly in his office, on the train, and in his New Canaan home. No question here, the process of his intuitive recognition and nurturing of talent is compelling.

During these long and frustrating years of work, we meet Perkins’ loyal wife (Laura Linney) and Wolfe’s tempestuous mistress Aline Bernstein (a fine Nicole Kidman) who abandoned her husband to enter a stormy alliance with her lover. The movie winds its way through those unions but centers nearly entirely on the relationship that develops between Perkins, the wise, controlled, supremely capable editor and Wolfe, the explosive writer of Look Homeward, Angel who died at 37 with his reputation as one of the finest of American writers secure.

Some serious negatives mar the fine story. Perkins’ nice gang of young daughters is made to giggle repeatedly and excessively. Guy Pearce and Vanessa Kirby are oddly miscast as Scott and Zelda Fitzgerald.

But the main problem is the performance of the terrific actor, Jude Law. None of us knows the degree of Thomas Wolfe’s actual intensity but Law plays the role in such overdrive that it undermines the performances that surround him. Words alone could have done the job. He seems not just an exaggeration but a caricature.

Colin Firth is thoroughly credible as Max Perkins who never loses his temper, just quietly admonishes, “Make your choice, Tom, right now.” It is he, in the exchanges with Wolfe, who gives us intriguing flashes of his philosophy of editing. No ego there, just a quiet intuitive certainty in knowing what should stay and what must go.

So the judgement is mixed. If you have no interest in the legendary editor of the era or in his writers whose books defined the 1920s, you may well be thoroughly put off by Jude Law’s unexpectedly odd performance. But if you have a residual fascination with words, editing and especially with Max Perkins, listen carefully to the dialogue for the real story on how these two men cut a manuscript by half until it became what is still widely regarded as an American masterpiece.