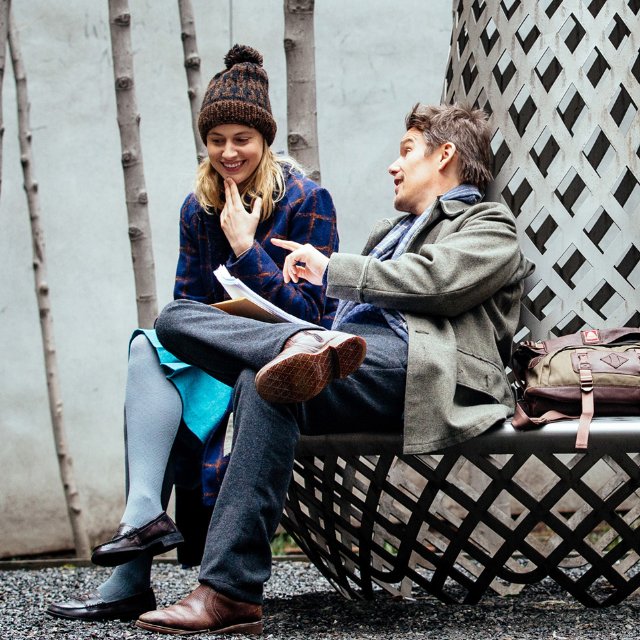 Maggie’s Plan steps out of the ordinary in the first scene when Maggie (Greta Gerwig) helps an old man as he crosses a street. Unbidden, she knows he needs help and gives it to him. That scene is the announcement that Maggie has only to meet people to have a plan for their welfare. This is the story of the complications of her good intentions.

Maggie has given up on finding a husband as partner in creating the family she now feels ready to have. Her solution? She chooses Guy, a mathematician turned pickle farmer as the donor. As luck would have it, just after this accomplishment she falls for John (Ethan Hawke), an adjunct professor in anthropology at the college where she works. John is sick of writing his novel in the shadow of his highly regarded wife Georgette who is an eminent professor at Columbia. John leaves Georgette to marry Maggie who works to support him while he writes the book he knows will shake the literary world.

Jump three years to a frustrated Maggie who is sick of doing all the work and wants to unload John without hurting him. She hatches an elaborate plan that will make everyone happy. Yes, Maggie has a very big heart.

In an unusual stroke of luck, writer Rebecca Miller’s script about a master designer of the lives of other people has the cast that is fully capable of creating the screwball story. The fun of it all is delivered by actors who, like Gerwig herself, are anything but ordinary. In fine tune with each other, they give us an offbeat tale about the oddballs who become involuntary players in Maggie’s grand plan that runs amok repeatedly.

In a key role to the comic success, Julianne Moore builds Professor Georgette as arrogant – but not really – nasty – with a soft side – and with a hint of a heart just waiting to be touched. Ethan Hawke is perfect as the self-absorbed novelist who is convinced the world is just waiting for his greatness.

It is Greta Gerwig who makes the whole crazy thing work. She seems bigger than life with a certain natural awkwardness in her manner that allows Maggie to plan carefully and then stumble through its execution with comic clumsiness. As if this isn’t enough trouble, throw in Bill Hader and Maya Rudolph – both veterans of Saturday Night Live.

Rebecca Miller’s movie jumps along through all the comic pitfalls strewn in the path of someone who has assumed the responsibility for planning the lives of others. Greta Gerwig is the kind of human being who seems born to bring comedy alive. She is a big, not especially graceful presence who seems to enjoy being part of the joke. As she targets herself, she generates a gentle affection in the audience for a woman who thinks always in terms of a master plan.