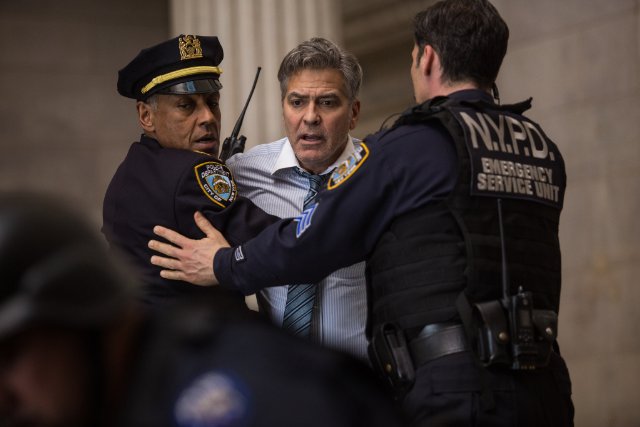 Money Monster is both appealing and aggravating. Appealing because Julia Roberts and George Clooney always deliver for our pleasure, aggravating because once the theme is established, it is painted in primary colors so strong that it loses the force of the point it is making. The point? The rot of Wall Street.

There can be no question about contemporary Wall Street’s vulnerability to mockery given the crass excess of its unfettered ways, but isn’t that very excess an invitation to a slick, sophisticated comment by Hollywood? Instead, and unfortunately, this movie is an odd mixture of comment and comedy that often borders on the level of the Keystone Kops.

The opening scenes of Lee Gates (George Clooney) as a television stock huckster hustling his picks in ludicrous costumes as he tells bad jokes set a silly, indelible tone. After Kyle Budwell (Jack O’Connell) bursts into the studio during a live broadcast and forces Lee, at gunpoint, into an explosive vest, just settle in for a long stretch of watching the entire New York City police force (with timely police errors) descend on the hostage crisis.

Throughout the ordeal, George Clooney, imprisoned in the vest bomb, is reduced to cautious, reactive responses to the man who holds him prisoner. We, in turn, are reduced to sitting in mild admiration of George Clooney’s handsome face for far too long. But, as with everything here, there’s an upside.

The upside is Julia Roberts as Patty Fenn, producer of the show, who works backstage to unravel the mystery of the collapse of the company that has destroyed Kyle’s savings. Calm and deliberate, Patty directs the backstage and onstage action through earphones as she tries to save Lee and nail the corporate culprit. Credit Emily Meade with a powerful short scene that shifts the movie in a welcome new direction. For the audience, it’s good fun to see what’s required to support the one person we see on screen when we watch the news.

Dominic West is appropriately venal as Walt Camby, the corporate villain, and Caitriona Balfe creates a credible accomplice who eventually sees the light. As CEO of the manipulated company, Camby unleashes the standard defense of unrestrained capitalism as the essential core of the country.

It can be no coincidence that a Jodie Foster/George Clooney/Julia Roberts movie about Wall Street greed appears at the height of the 2016 election campaign. Liberals in the audience may smile while conservatives will probably squirm.

But the big negative here is that a perfectly timed subject that begs for sophisticated mockery nearly drowns instead in mediocrity. The cast and filming are excellent but these good actors deserve a better script. We know where it’s going with few surprises along the way.

If you find anyone who can resist seeing Roberts and Clooney in a hostage thriller, just let me know. With all its faults, this one will be just fine at the box office.