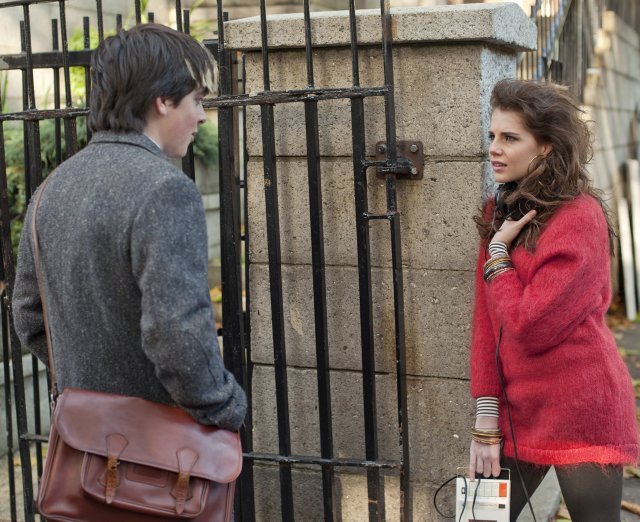 Every now and then a small stunner punctures the mediocrity of the movie summer. Here comes Sing Street, an Irish movie that grabs our hearts early and never lets go. If I tell you this is a movie about a 16-year-old high school student starting a band, nothing unusual about that. When I add that we’re talking here about a small group of boys from troubled families who start to dream of better lives it becomes a different tale.

John Carney – director and writer of script and songs – has crafted a jewel that builds gradually to an ending that is an inspired capstone to his movie. The story begins in the house where Conor (Ferdia Walsh-Peelo) and his older brother Brendan (Jack Reynor) hang out upstairs to avoid the constant fighting of their parents who announce that divorce is imminent and the family house will be sold. Conor must enroll at Christian Brothers, a school rooted in authoritarian bullying.

On the day Conor sees Raphina (Lucy Boynton), a lovely young girl standing gracefully on the steps near his school, he approaches her and invites her to be in a video of his band. Conor, of course, has no band. The balance of the story is his recruitment of schoolmates for the band he now must build as a vehicle for knowing Raphina who is an aspiring model.

The core of the movie is that it is about far more than building a band. It is about a group of young people from tough backgrounds who begin to dream of something better than the lives their parents live. Writer/director Carney avoids time worn solutions, opting instead for emotional confusion and gradual awakenings. He shuns easy wrap ups in favor of showing what can happen when young people use dreams as stepping stones out of a melancholy life. Terrific performances from the principals and their supporting cast make the story magical.

Ferdia Walsh-Peelo plays Conor in a consistent tone of shy questioning. Can he approach the woman he fell in love with at first sight? Can he create a band? Are dreams possible without any kind of emotional support? Walsh-Peelo creates an innocent young dreamer who never loses his shyness or honesty. A perfectly cast Lucy Boynton makes Raphina a 17-year-old who is testing sophistication, loyalty, and ambition as possibilities but never quite loses her natural goodness. Conor: “Sometimes I want to cry just looking at her.”

Jack Reynor plays Conor’s much older brother who long ago surrendered to the family misery and sank into drink, drugs, and nothingness. In a scene so overwhelming that it reduces the audience to absolute silence, Brendan rises in sudden, strong emotional support of his younger brother’s dreams.

The characters created by these young Irish actors are consistently believable, never overdone, and deeply appealing in their confusion and shyness. And all of it is set to the beat of John Carney’s infectious score. You won’t forget this movie.