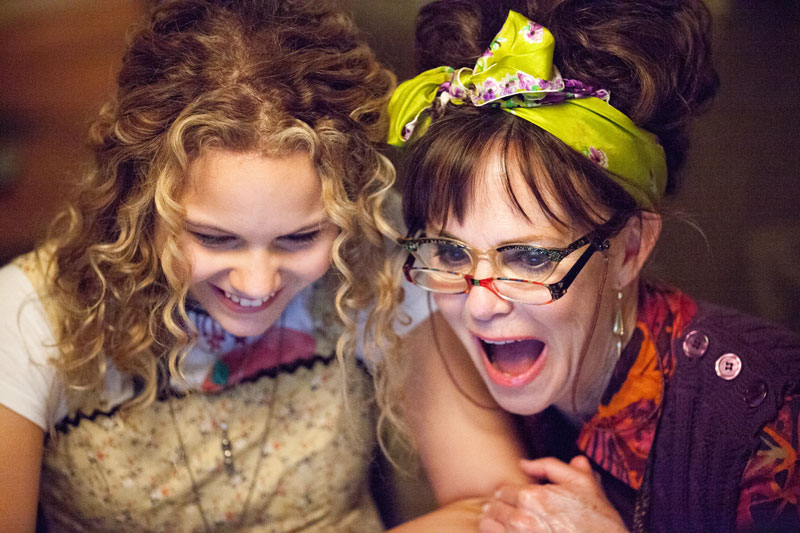 In an inexplicable streak of bad luck for audiences, Hello, My Name is Doris is labored and contrived beyond the limits of normal endurance. Every single move that is presented to us as a surprise is telegraphed far ahead of arrival. Sally Field tries hard – too hard – and the result is an embarrassing excess. How did this happen?

Consider. Doris is an accountant who has taken care of her sick mother whose corpse we meet in the first scene. Mom was a hoarder; daughter Doris follows suit in the house they shared in a veritable swamp of unnecessary, ugly possessions (Overdone #1). Dressed in a mess of incompatible clothing bits and topped by a mountain of upswept hair, Doris tops the whole thing off every single day with some awful variation of a big ugly ribbon and bow (Overdone #2).

In the suffocating cubicle life at her office she is as invisible to her co-workers as the furniture that surrounds her, ignored by her fellow dwellers who politic around her invisible self. And so we are set up for the emergence of the real Doris, but wait, there’s more to endure. John (Max Greenfield) arrives as the firm’s new artistic director. An open, friendly kind of a guy who chats easily with colleagues, including Doris, he becomes the trigger for her conversion.

First we must watch Doris conjure a widely spaced series of embarrassing fantasies triggered by the mere sight of John at the office. The embarrassment comes not because she is 60ish and he in his 40s, but because Doris is a ridiculously silly creature made that way by Sally Field’s extreme posturing and by a scriptwriter who hammers home Doris’s failings in voluminous excess.

Even when Doris chucks the hair bows and emerges – a chick from the egg that contained her – the change is physical – clothes and hair – not personality. Nothing explains why dull Doris is suddenly the pleasure center of the millennial social gatherings that now love her, appreciate her, and laugh at her foibles which are now recognized as endearing personality traits.

Much of the blame for all this must go to scriptwriter Laura Terruso and writer/director Michael Showalter for explaining the obvious until we in the audience feel like screaming. They let themselves be captives of the tone they set in the early scenes. A cultural misfit who ultimately triumphs is a timeworn staple in movie comedy, but in this sad case, there is nothing new, nothing appealing, and nothing at all to make us laugh. An old premise demands a new twist. Don’t look for one here.

It’s no fun to savage a performance by an actress who tries as hard as Sally Field does as Doris, but she is too capable to have surrendered to the mediocrity and excess that infects this film. No audience should have to suffer a movie that is just one long wait for the lights to go up.