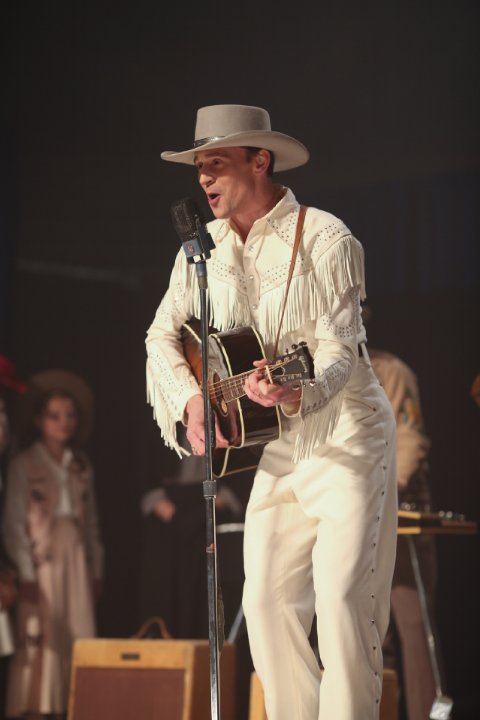 Hank Williams was a towering country music figure who had written thirty-six hit songs before he died when he was twenty-nine years old. By then, his songs had spread among music lovers of all tastes and he had become a cross generational legend. What fodder for a great biographical movie.

Given a wealth of personal and musical material, Director Marc Abraham has chosen to focus on Williams’ personal troubles in a way that denies audiences the pleasure of soaking up the richness of his music.

The movie opens on a set of beautifully lit still shots of Williams standing quietly – hat shading his face, guitar across his chest. Director Abraham then switches suddenly to Williams (Tom Hiddleston) and Audrey (Elizabeth Olsen) as they are being married in a gas station. From that point forward, Williams’ alcoholism and his womanizing are delivered to us in an episodic series of scenes that rarely make sense and do little to advance the story.

As we endure the repetitious, oddly dull personal failings, we find ourselves waiting for the next scheduled public engagement when we can hear the melodies. For anyone who loves Hank Williams’ music, Tom Hiddleston’s delivery of the wonderfully familiar songs is the big reward. Every song he wrote became a country classic.

Williams had long dreamed of singing at the Grand Ole Opry in Nashville and once he got there he went on to become a star far beyond the country music world. That journey is the storyline that should have been the framework of the movie. It might have been set against the rich ninety year history of the Opry’s famed Saturday night shows that still draw fans from around the world. Hank Williams helped bring country music from Nashville to national favor. His time at the top was short but his songs have endured for six decades.

Director Abraham did one thing superbly right in casting Tom Hiddleston as Williams. The British actor infuses the songs with the famous Nashville color and does it so well that he almost holds us through the endless ordinariness of all the personal failings. Elizabeth Olsen is excellent as Audrey, the tough, peppery equal to her husband Hank. Cherry Jones, to her credit, doesn’t exaggerate the role of Williams’ devoted mother. The other actors are competent but they are lost in the far too long and repetitious scenes of Williams’ descent into drink. At more than two hours, the patience of the audience is tested.

Tom Hiddleston is peerless as he creates the country singer from Alabama who wrote and sang his way to fame. He saves the movie. Asked at one point to explain his music, he captures the essence of Hank Williams’ songs: “Everybody has a little darkness in them. I show it to them – darkness and shame.” And that was the heart of the music Hank Williams wrote and sang for millions of people in his very short life.