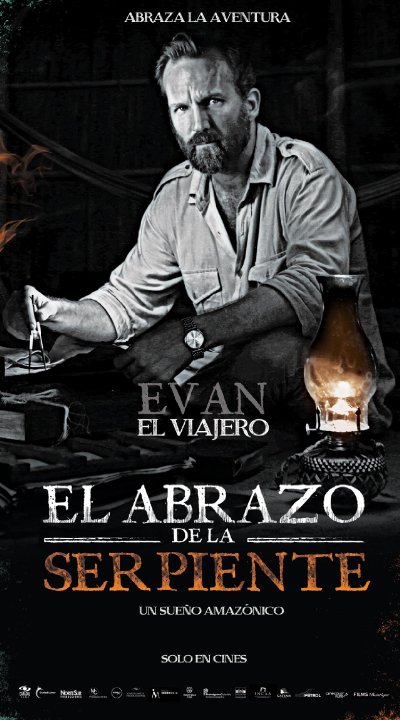 See The Embrace of the Serpent at your own risk. Unless you are made of steel this one is likely to reach you on several levels and remain there for a long time. Before thinking about that impact, here are the bare bones of the story that are confusing in the film. Know them going in, and the deeper questions can become the focus.

Director Ciro Guerra’s film is based largely on the diary of the German explorer Theodor Koch-Grunberg (Jan Bijvoet) who travelled to the Amazon jungle in 1909 in search of Yakruna, a plant with extraordinary healing powers. Forty years later, Theo’s diary in hand, a scientist named Evan (Brianne Davis) returns in search of the same plant. Evan will be guided by Karamakate (Antonio Bolivar) who, we realize after some heavy concentration, is the old version of the young man (Nilbio Torres) who had guided Theo years earlier.

Karamakate is now a lonely old man who tells Evan that he is the last living person of his tribe. It is he, forty years ago and now, who reveals the effects of decades of colonialism on his land. It is his story that shows us the erasure of tribal cultures by the rubber barons. The film, beautifully shot by cinematographer David Gallego, alternates between the experiences of the two scientists Theo and Evan. We are given two men and their guide paddling their canoes through forty years of exploitation.

Because the Amazon jungle is so immense, I kept thinking naively that there was room for everyone, that the damage to the tribes might be minimal or forgotten because the physical distances among the cultures were so great. But distance doesn’t remove the stain of colonialism. By the end, I understood, and that is the power of the film.

That power is what triggers even more questions. Were the rubber barons who destroyed the Amazon tribes different from the English colonials who destroyed the American Indian tribes? There, and here, the widely separated tribal cultures in an enormous land were destroyed. Just go to Galllup, New Mexico to see the remnants of the once proud Indian cultures. You see Karamakate sitting on a bench with a bottle.

Are we so different? With our differing philosophies that develop through loyalties to our splinter groups in religion, business, and politics, aren’t we quite like the Amazon tribes who organized around the teachings of their various churches and then fought among themselves? We have seen repeatedly throughout our history that we are still a nation of believers who cannot agree on anything.

Ciro Guerra’s film isn’t an accusation as much as it is an exploration of the questions that unfold when an outside power intrudes in an existing culture. Who, we might wonder, will be that power that one day erases the long run we have had for more than two centuries? I hadn’t wondered about that before this movie made that question inevitable.