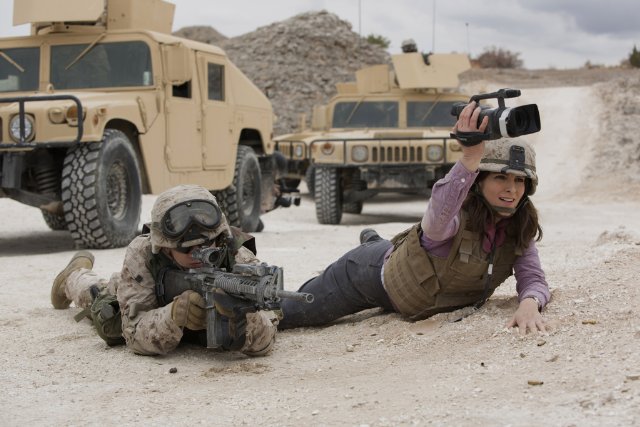 Tina Fey is an elegant, accomplished comedienne who has created a national treasure with her take-offs on Sarah Palin. Her capture this year of Palin’s endorsement of Donald Trump left the national TV audience chuckling with delight. She is a major talent perfectly suited to the sharp bursts that propel television whether in a series or popping up on the news. That’s both the triumph and the problem.

Is it possible that Whiskey Tango Foxtrot, fails because Fey and her collaborator, screenwriter Robert Carlock, are operating in a medium rooted in entirely different timing? Because the film never achieves a sum of its parts, it feels fractured throughout – as if it were being filmed for television in a series of shots.

Kim Baker (Tina Fey) is a bored, desk-bound reporter writing news copy. Craving action and free to look for it, she heads for Afghanistan where she is plunged into the alcohol and sex fueled culture of Americans dropped into the chaos of wartime in a foreign land. Kim meets Tanya (Margo Robbie), a sophisticated competitor, Fahim (Christopher Abbott), an Afghan protector, Scottish photographer Iain (Martin Freeman), Alfred Molina as the Afghan attorney general, and the American general (Billy Bob Thornton) who makes her promise not to sleep with any of his men.

These are the characters who rise from the din of the far-from-home community, and only Christopher Abbott as Kim’s protector draws our interest. Personal episodes alternate with battle explosions and environmental filth while Kim navigates the bedlam bravely. Now and then – as when she understands the consequences of not being covered from head to foot in public – she delivers a genuine sense of understanding and fear. Otherwise, we watch the unfolding of explosions and danger that are photographed beautifully but rarely fit the script. The constant switching between Afghanistan’s war torn landscape and the alcohol soaked gatherings of ex-pats seems contrived.

The sight of Tina Fey striding through the turmoil with dignity and perfect makeup on her journey from office boredom to successful war correspondent leaves us in a state of confusion. It’s unfortunate that the story Fey and Carlock want to tell – of Afghanistan as the forgotten battlefield deep in the shadow of the Iraq war works well but is nearly erased by the off duty politics.

Because the movie is filmed expertly, we have become more interested in Kim’s navigating the treatment of women in the Afghan culture than in a bored American copywriter’s desire to advance as a war correspondent. Ironically, when the script shifts to her eventual professional success stateside, we lose interest.

Because Fey is a brilliant observer of her own country’s foibles, we keep waiting for punchlines that never come. It can’t be all bad to be so good at seeing to the heart of human imperfection that audiences can’t accept you in a two hour movie. May Tina Fey reign as master of short bursts of observation in that other medium.