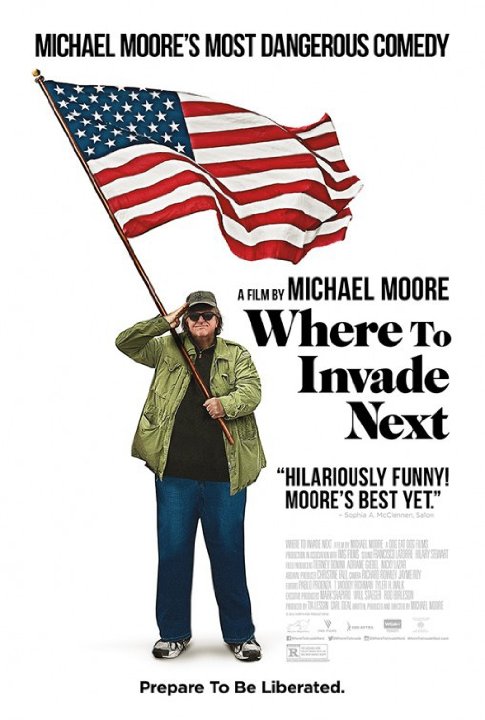 What a surprise. An audience streaming out of a Michael Moore documentary is usually arguing before it gets to the exit door – a sure bet that liberals and conservatives have been re-stoked in their hard core positions. Not this time. At a showing of Where to Invade Next, the audience laughed, sighed in approval, and stood to clap as the credits rolled. What has happened to you, Michael Moore?

In a timely burst of insight, Moore made a list of problems facing America, and because those problems are universal, he decided to visit other countries to see how they deal with them. His list: Italy, to discuss labor. France/ health. Finland/education. Slovenia/quality of life. Germany/work. Portugal/crime. Norway/human dignity. Tunisia/women’s health. Iceland/Women.

It’s easy for us to say that these are smaller countries, that our problems are too big to solve in any definitive way. That’s too facile an answer. The attitudes expressed by the leaders, officials, protestors, and criminals in these countries are rooted in an honest search for solutions. If you feel like raising an eyebrow when human dignity is offered as the basis for a solution to grave problems, at least think of this movie as an invitation to look at how other countries do things. You may be surprised.

It is precisely because of the determination of national leaders to build on such concepts that our own skepticism is suddenly dimmed, if not extinguished. America ranks 29th in the world in education. Listen to the Finns explain how they did it. You say they have a homogenous population? That it can’t be done here? Try to open you mind to their underlying concepts, to those generalizations that we tend to dismiss. The results in Finnish education are not only compelling but deeply appealing.

And then the big surprise. Nearly every one of these countries tells Michael Moore that they built their turnarounds on some version of an American principle. And they wonder why we can do it in our own country in the 21st century. And when one says, “You play more solo,” he hands us the thought that rolls around in our heads for a long time after we leave the theater. Yes, we do play solo, but haven’t we come to the point where we have to devise solutions that will affect many?

If it’s a stretch to say that the strident Michael Moore we all know has become an optimist, it’s a revelation to hear him say “The American dream is alive and well everywhere but America.” Almost everyone he talked to said they have based their new systems on an American idea. So put aside your annoyance at his disheveled appearance, his gimmicky flag plantings, and especially at his past movies that annoyed you. Just ask yourself if we just might be able to steal back our own ideas in working to change our habit of fighting among ourselves. American problems/American solutions.