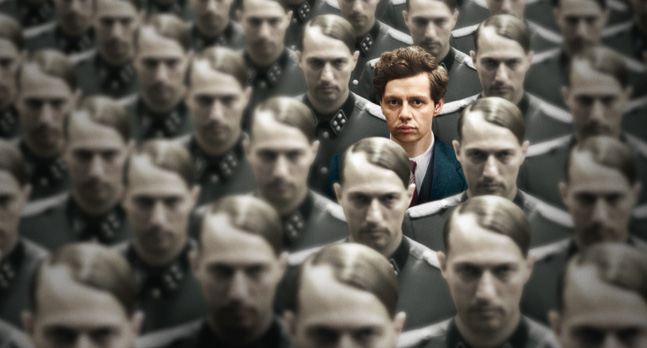 Thirteen Minutes is an intensely graphic history lesson. Older Americans will remember watching Translux newsreels of the Hitler regime during WWII. Middle-agers will remember studying it in school. For Millennials, it is ancient history. What are the questions that linger for people of all ages who watch this story of the 1939 assassination attempt on Hitler?

The central question from that time grows ever more puzzling with time: how did a man with no power base manage to win fanatical loyalty as leader of the Nazi party while designing the Holocaust and leading Germany into a war that killed 55 million people? This movie shows the frightening rallies that elevated Hitler to total control while ordinary citizens morphed into obedience. Georg Elser was not among the obedient.

Elser (Christian Friedel) was a skilled carpenter who detested the idea of war. When he heard that Hitler was going to annex Austria and part of Czechoslovakia, he made his final decision to plant a bomb in the Munich beer hall where Hitler spoke each year. This movie is the story of Elser’s building and planting the bomb, the explosion that followed, and the brutal torture he endured from the moment he was captured after the explosion in 1939.

Elser came to the beer hall every night for supper and then hid there while working through the night for 30 nights. He hollowed out a pillar, set his explosives, and on the night of Hitler’s speech, eight people died in his explosion while Hitler escaped because he had left thirteen minutes early. Elser was caught as he crossed the Swiss border.

Actor Christian Friedel hands us a piece of history that wasn’t talked about during the immediate post-war years. He is thoroughly believable as an ordinary man whose conscience drove him to plan the assassination and as the prisoner who confessed under torture but held fast to the truth that he acted alone.

As for the cast, it is uniformly chilling to watch actors create the documented sadism. The Nazis they create leave us stone cold. Unfortunately, in a mistake common to many serious historical efforts, the filmmakers inject bits of Elser’s former lover to widen the film’s appeal. It is far too hard, in this case, to change moods at all after we have been so skillfully dropped into that horrific time.

The lingering question: why was Elser’s family ostracized for decades after the war? The Nazi hierarchy managed a collusion of silence about the atrocities for fifteen post-war years; that silence was punctured by a young German lawyer who grew to adulthood a decade after the war ended and discovered the head of Auschwitz teaching in a local grammar school. For that extraordinary story, see Labyrinth of Lies, nominated for an Oscar this year. With these two excellent films, Germany has punctured the silence that kept a whole generation of the country’s young people in ignorance about their country’s role in World War II.