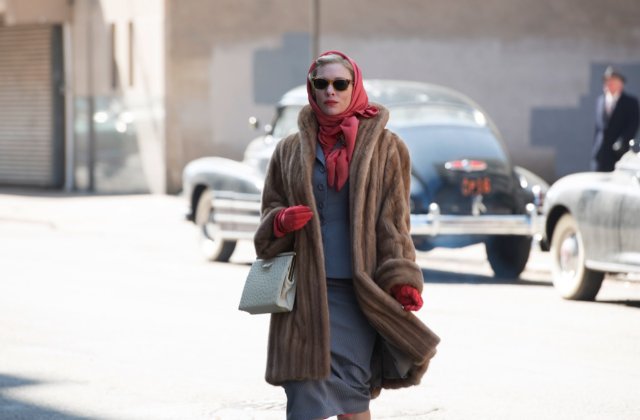 If at any point you begin to think Carol is unfolding too slowly, just refocus. Two very good actors deliver their story with subtleties of expression rather than words. We can read hesitation, guilt, concern, pleasure, and anger without a word being said. Cate Blanchett’s Carol and Rooney Mara’s Therese speak loudly in silence as they fall in love.

We in the audience are asked to adjust to the culture of the 1950s when homosexuality was labelled a sickness that called for psychiatric intervention. Can young people today even begin to understand the force of that taboo now that there is general acceptance of the belief that no one has the right to tell anyone else who to love? After the Supreme Court validated choice, change moved through the culture on fast forward. It’s important to remember how recently that shift happened as we watch Blanchett and Mara weave their love affair through the toxic rejection of the ‘50s.

As the movie opens, the cars and the clothes announce the time frame. Therese (Rooney Mara) works in a department store where she serves customers quietly in appropriate sales clerk skirts and sweaters. In floats Carol (Cate Blanchett) wrapped in fur, her mouth painted in the harsh red slash of the day. She is there to buy a Christmas present for her daughter Rindy (Sadie and Kennedy Heim). When quiet Therese reveals an atypical understanding of electric trains, Carol is intrigued and the story is set in motion.

Director Todd Haynes delivers snippets of their backgrounds in the early scenes. Therese is uncertain about life and turns away from men. Richard (Jake Lacy) wants to marry her and – in the ‘50s way – assumes that his proposal means automatic acceptance. By the time she returns the gloves Carol left on the store counter, Therese too is intrigued.

Carol and her husband Harge (Kyle Chandler) are separated with shared custody of Rindy and now, at Christmas time, Carol refuses Harge’s insistence that she spend Christmas with his family. Instead, she convinces Therese that a long car trip west is what they both need. They will have freedom to love.

As hard as it is to hold the screen with Blanchett and Mara, Jake Lacy and Kyle Chandler do a beautiful job of creating two men who would have had their way if only they hadn’t chosen women who were strong enough to defy the culture. Kyle Chandler is outstanding as Harge, a ‘50s power man who uses all available tricks to force Carol to return to their marriage. Sarah Paulson is strong and believable as Abby, Carol’s close friend and former flame.

Look forward to watching Cate Blanchett launch a withering attack on her husband and a room full of lawyers in a confrontation appropriate for the era. Blanchett and Mara have stamped “1950” on their characters with performances that take a hard look at love before the new culture changed all the rules.