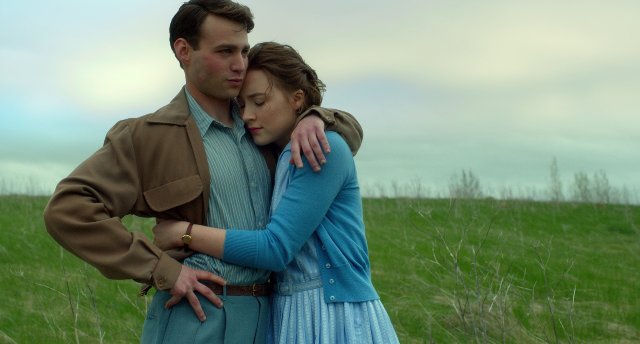 See Brooklyn when you’re feeling peaceful. This flawless, quiet movie breaks all the usual rules and washes gently over any audience. Don’t expect the usual fare of conflict and resolution. This one is different. Just sink slowly into its mood.

Initial credit goes to John Crowly who directed the screenplay by Nick Hornby based on the novel by Colm Toibin. And then, to the cinematographers who evoke both Ireland and Brooklyn of the early 1950s. Together they create an abiding sense of place that is essential to every scene in the story. Through them, we understand exactly why the characters are who they are and why they have primal ties to the land where they were born.

The actors in this uniformly fine cast infuse their characters with the pull of the emotions that are their lifeline. Eilis (Saoirse Ronan) is leaving Ireland for the bustling Irish community of 1950s Brooklyn. Father Flood (Jim Broadbent) has found her a place to live and a job in an upscale department store. Eilis, a quiet, capable observer of her surroundings, absorbs all this while housemates and co-workers babble around her. She meets Tony, a gentle Italian boy, and they fall in love. When a family crisis draws her back to Ireland where she meets Jim (Domhnall Gleeson) she feels the pull of the land where she grew up. Neither she nor we know whether she will stay or return to Tony in New York.

The remarkable thing here is that even a minor flaw could have undone the mood, and that never happens. It is all given to us in few words. Saoirse Ronan resists verbal or physical expressions that reflect her feelings. We simply watch her serious, quiet Eilis absorb everything around her without comment. Her new world is simply seeping slowly into her intelligent mind and warm heart – fodder for the decisions she will make. Hers is one of the loveliest performances I have seen in a very long time.

Given Ronan’s extraordinary performance, we might wonder how any actor who plays Tony could create a character who wouldn’t jar the whole. Meet Emory Cohen. He is superb as he builds Tony as an undemanding, understanding boyfriend to Eilis. His Tony has a sweet, understated charm that wins us quickly and touches us again when we learn this hardworking son of Italian immigrants has a very American dream for his future.

No false notes from anyone. Domhnall Gleeson is calm and wholly appealing as the handsome Irish boy who also loves Eilis and can offer her a comfortable life. Jim Broadbent as the supportive priest, Julie Walters as Mrs. Keough, and many more give grand support. All of them support the tone set by the writer and director.

Why are we so affected by this movie? Perhaps the answer is that the filmmakers have reached feelings in us that are so deep we rarely talk about them; and they have done it very gently.