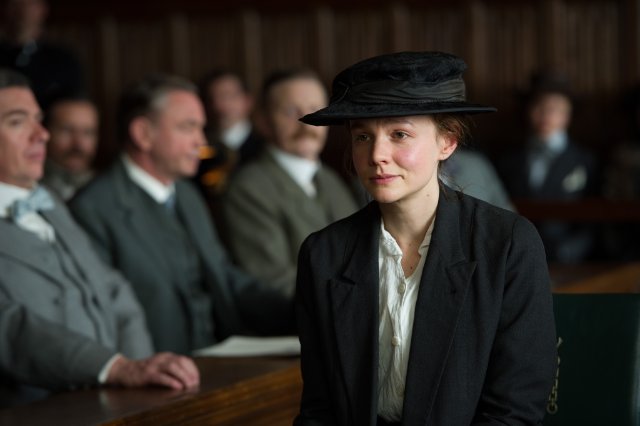 It’s dark, intense, and horrifying. That’s Suffragette, and if you think you’ll be watching a piece of history involving women marching peacefully for the right to vote in England, think again. We are taken to London during 1912 to meet the characters we will come to know and respect. They work in the Glass House Laundry where Maud Watt (Carey Mulligan) became the head washer at seventeen. She works among women who work one third more hours than the men, earn less, and suffer burns and headaches from the gas along with demeaning comments by the men. Maud goes home each night to a difficult husband and their son George who she loves deeply.

In the classic way of a woman torn, Maud is reluctant to risk her job when co-workers urge her to come to hear Emmeline Pankhurst (Meryl Streep) speak from a London balcony. Pankhurst, already in hiding from an angry government, invites all women in Britain to become part of the rebellion against the male government that refuses to allow them to vote. She speaks and disappears after implanting raw determination in her listeners. Maud surrenders to Pankhurst’s rebellion reluctantly, the thrill of the cause tempered by the fear of consequences for her small son and her job.

When her husband (Ben Whishaw) locks Maud out of the house, he is protected by law that says a father’s voice is law. Torn but resolute at male cruelty and dominance, she joins the movement and must watch another family adopt her son. When the government refuses yet again, the women resort to violence – breaking store windows, burning a house – as the only way to draw attention to their cause. For that, they are beaten by mounted police. The cycle of violence/retaliation/violence escalates until a heartbreaking tragedy puts the battle on the front pages of the world’s press.

Jail terms, force feeding, rocks, death, brutality, mockery, degradation. It is a movie of unrelieved darkness. Why go? Precisely because their ordeal has resonance in the injustices of today. Abortion? Birth control? Gay Marriage? Equal pay for equal work? When the film shifts in its final scenes to actual news footage of women marching in 1917, the reality of this piece of history washes over us.

We are reminded once again of the power of a true story delivered by a fine cast. Carey Mulligan gives a fiercely intelligent, yet controlled performance as a symbol of the agonizing emotional path that brought women to the cause. Helena Bonham Carter is terrific as a strong, dedicated persuader; and Anne-Marie Duff stuns and silences us with a tragedy of mythic proportions.

Why would anyone suggest that people not see this important movie about women who had to resort to physical aggression to gain the right to vote? See it because it is really about the universal battle for humanity in the treatment of women. As one woman says, “Wars are the only language men listen to.”