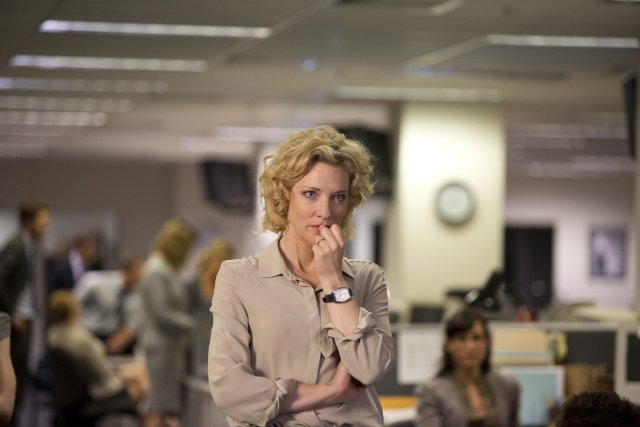 It would be easy to describe Truth as the story of the high profile downfall of newsman Dan Rather. As a young man Rather had drawn the national spotlight when he was tapped by CBS in Dallas to cover the assassination of President Kennedy in 1963. After that, he built a highly visible career at CBS as a news anchor covering Vietnam, Watergate, and other major events in that troubled era. He is played here by Robert Redford in dignified, somewhat pale tones that keep him from jumping alive on the screen.

Odds are Rather/Redford would be taking second billing here anyway because this movie is about Mary Mapes, producer, and she is played as a tornado by Cate Blanchett. For more than twenty years, Mapes had served as a widely respected producer in the broadcasting industry. In 2004, she and Rather were forced out by CBS for their roles in the investigation into the details of President George W. Bush’s military service. Did he or did he not use family pull to avoid serving in the military? To get into the National Guard? To avoid serving time while in the National Guard?

The movie grapples with these questions without fashioning firm conclusions. Was the president suspended from the Texas Guard in 1972? After requesting a transfer to Alabama from Texas, did he fail to show up for duty? Did he quit nine months early to go to Harvard Business School? The reporting produced by Mapes and spoken on air by Rather was attacked widely as based on false documentation. What was the truth? Left and right argued the issues then and now. The movie waffles.

Mary Mapes wrote for years about people who abuse their power. She detested bullies and, this movie says, with good reason. She had suffered bullying and serious abuse by an alcoholic father who resented her for continually asking questions. As an adult, she carved a successful career by asking questions about abuse of power in our national life. When Mapes discovers the contradictions in the Bush record, she applies her intensity full bore to the investigation.

As the story unfolds, the screen sizzles with arguments and confrontations intensified by looming and exacting deadlines. It is a terrific journalism story rooted in reality but peppered with accusations about the validity of the evidence.

James Vanderbilt wrote the screenplay based on Mary Mapes’ book about her experience. Whatever the whole truth of the matter, his script is crisp, fast, and full of suspense and telling detail. Cate Blanchett, with a perfect American accent, gives us a towering journalist dealing with a big story followed by the loss of the job she loved. Hers is a superb portrait of a powerful woman who had a low tolerance for deception and manipulation. When she loses the work she loves so much, she unravels. Blanchett succeeds in forcing us to understand the true depth of that professional and personal loss.