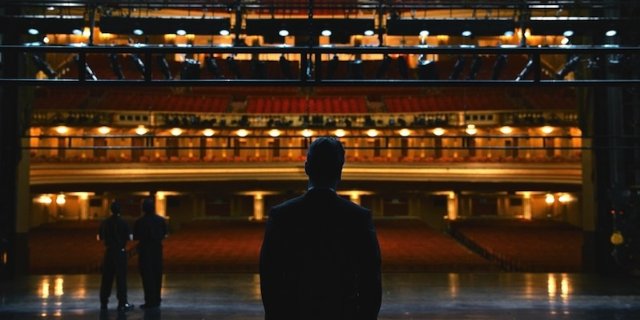 You may not like Steve Jobs – man or movie – but hang in there because after all, he did change our world in ways that will continue to reverberate for generations. Who was this young man who managed to force the people who didn’t like him to do things his way? He was a man possessed, and he could be rude, cruel, and dismissive of anyone who disagreed with him.

Aaron Sorkin has written his movie in three distinct parts, each built around Jobs’ signature presentation of a new product to a huge, excited audience. Like a three act play, the film takes place backstage at the unveiling of the original Mac, the NeXT, and the iMac over a fourteen year period. Because the camera rarely leaves the backstage set, what happens there becomes the raw material for forming our view of Steve Jobs (Michael Fassbender).

We watch his relationship develop with Lisa (Perla Haney-Jardine), the daughter he refuses to acknowledge as his own; we watch the grim politics between him and his associates, Apple executives Steve Wozniak (Seth Rogen) and John Sculley (Jeff Daniels); and we watch the tough love support offered him by Joanna Hoffman (Kate Winslet). Each drama is fraught with disagreement and often unpleasantness until we wonder how this man – who is fired and later rehired by Apple as we watch – can possibly have imposed his will on so many strong people.

If he had caved in to the board that fired him, would he have ever succeeded in imposing the standard of beauty and simplicity of design that made Apple soar? Could he have realized his dream of a computer for every person? He knew that real innovation is rarely achieved by corporate committee.

We are handed the story of this complex man in a first rank performance by Michael Fassbender with an equally fine one from Kate Winslet as Joanna whose strength equals his as she tries to keep him from self-destruction by ego. Aaron Sorkin wrote the script and Danny Boyle directed this movie based on the admirable biography by Walter Isaacson. This fine team gives us at least some insight into one visionary in the statistically small group of young men who changed the world.

The business of our world is now powered and connected by technology that came wrapped in Jobs’ designs. This movie, which is not a barrel of fun, is a lesson in how inspired progress can spring from an eccentric genius who refuses to compromise and imposes his idea with the force of his personality. Despite the brilliance of his competitors, it was Jobs who stamped the beauty of simplicity on the box on desks worldwide. Who knows where it is all going next? Even Jobs didn’t foresee that his passion for beauty would put an iPhone in nearly every hand in the Western world. This movie shows us that the measure of who he was is still unfolding.