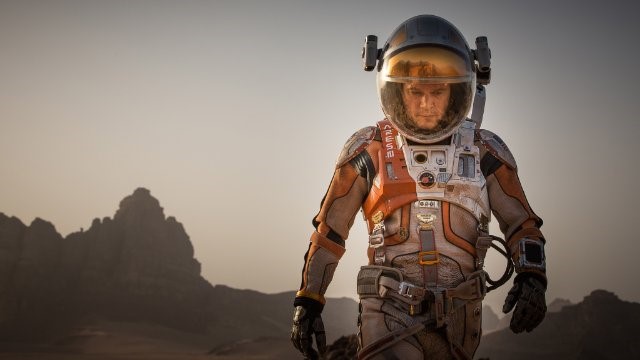 When things go wrong for the Aries III mission on Mars, the crew takes off for the long journey home without Mark Watney (Matt Damon) who is presumed dead by the others after being hit by debris. Half buried in the grainy red soil, he recovers consciousness and becomes The Martian – sole resident of the planet and sturdy carrier of the whole movie.

Mark faces two imperatives: he must connect with NASA to let them know he is alive and he must learn how to grow food in barren soil. In a welcome rejection of imagined impossibilities, the filmmakers kept an astrophysicist on the set to keep them within the realm of the possible. His verdict: the details are accurate.

We watch Mark explore his options, step by step, in an extended technology lesson courtesy of director Ridley Scott. Even if Mark reaches NASA, it will take a rescue mission four years to reach Mars. He faces thirst, hunger, and cold, but as a botanist, he manages to channel whatever fear he may have into meeting the challenge.

After focusing on Mark’s efforts for the bulk of the film, we finally meet the crew (Jessica Chastain, Kristin Wiig, Jeff Daniels). Sunk in remorse, they are unanimous in their determination to rescue their teammate. In keeping with the technical thrust of the movie, we watch them consider every possible way to reduce the time of the return rescue trip. At a crucial point a scruffy young tech genius in a t-shirt (Donald Glover) steps in with a solution that astounds the assembled experts. It’s a lovely touch that reflects the reality of a world where progress is being invented and implemented by the young. We live in a time where experienced professionals are being eclipsed as they learn that only the very young can understand the language of the new world. The generation of Bill Gates and Steve Jobs who started it all is being replaced by kids who have mastered an even newer language that the entire world is learning to speak.

Matt Damon is terrific as a thinker in a cerebral movie. Showing no fear, just acceptance and determination, he is thoroughly convincing as a scientist who is both brave and resourceful. Given the technical demands and the fact that he must act alone through most of the movie, he succeeds in a very difficult role.

If you have no interest whatsoever in how things work, you may tire of phrases like”degrees of arc, telemetry, MAV, SOL, and HAB,” but you can still enjoy the extraordinary visuals and a masterful sound track that enrich the explosive story.

Just hang in. The final section addresses the emotional needs of the audience just as they have gotten to know all the players. If the wrap up is pure Hollywood, we have earned it by paying such close attention to the absorbing technology. At last, we have been given a blockbuster with substance.