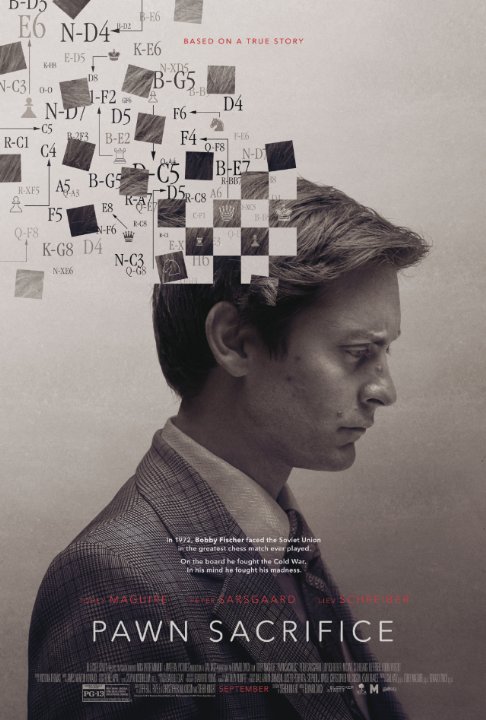 Where were you when chess prodigy Bobby Fischer was becoming a legend? If you were around in the ‘50s, you began to hear stories about the self-taught boy who had begun to challenge American chess notables. For ten years, he consistently beat the American establishment. As his ability drew the public gaze, his difficult personality and personal story took second place to his achievements. Pawn Sacrifice fills in the details.

At eight, alone in his mother’s world of angry politics, Bobby turned on her and yelled, “Go back to Russia!” He sought quiet in his room with a chessboard and rose steadily until he became the youngest grand master in the world at fifteen. He indulged himself in tantrums whenever something offended him and demanded silence of everyone within earshot. In 1963, Fischer faced world champion Boris Spassky in a matchup followed by the world. He was twenty years old.

To present this dramatic life story, Edward Zwick has directed a cast of fine character actors in the backstory we never knew. Tobey Maguire is entirely believable as the arrogant, angry Fischer who alternates long silences with explosive outbursts. Lily Rabe plays his sister Joan who is always there with support that he alternately accepts or rejects.

Two men stick with this difficult boy throughout his travels and troubles. Michael Stuhlbarg plays lawyer Paul Marshall, loyal protector, scheduler, and overseer. Peter Sarsgaard is extraordinary as the quiet priest who reads Fischer’s moods without trying to change him. He tries to guide Fischer with subtlety rather than control, and he understands the boy’s personality is a peculiar combination of brilliance and paranoia. “Without chess,” Father Lombardy says, “he doesn’t exist.” Sarsgaard’s performance is profound in its wisdom.

As Fischer starts to equate the Spassky match with the Russian nation as a whole, he tears apart every conceivable tool the Russians might use to spy on him including telephones and televisions. It’s the poor boy from America against the whole Soviet Union and the boy is an astonishing mix of incomprehensible brilliance and emotional damage. Fischer has made the Cold War his own.

The movie is wonderfully effective in presenting the world of chess tournaments – of huge audiences sitting in absolute silence watching two figures on a distant stage making their moves without uttering a sound. Few of us can comprehend the cerebral complexity of a game where it is said that for each move there are thousands of options. But Bobby Fischer alone says, “People think there are all these options, but there is only one right move.” And only he is able to find that one.

As the movie rolls toward the climactic game six with Spassky (a grand Liev Schreiber), we understand that in the atmosphere of the Cold War, the world is watching what is widely considered the greatest chess game ever played. Credit Tobey Maguire with showing us the impaired brilliance of a character who could never be measured by ordinary standards.