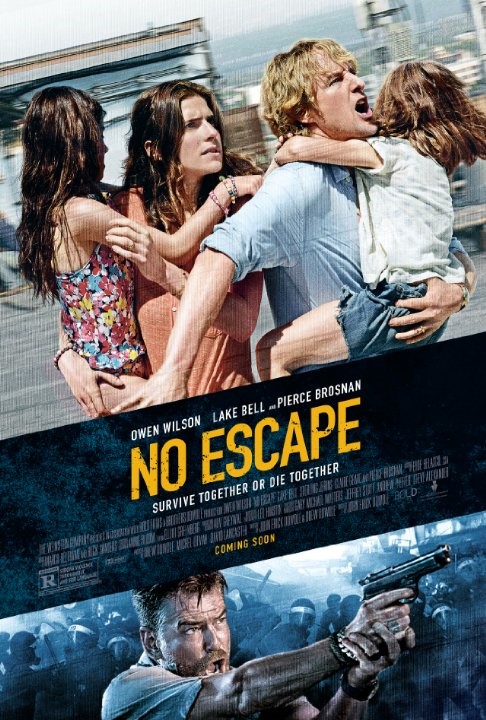 Roughly half an hour into No Escape you may feel like screaming “No More!” But you are doomed to another hour and twelve minutes of guns, snakes, fire, beatings, and killings – all in darkness.

There is a high audience fear factor here. Let’s go step by step.

Jack (Owen Wilson) and his wife Annie (Lake Bell) have been given an assignment in an unidentified Southeast Asian country. While staying at the Imperial Lotus Hotel, Jack goes out to browse downtown. Standing In a street bazaar, he notices the hanging decorations as they begin to shake. The rumbling grows into an explosion of noise as violence fills the area. A stranger in an unfamiliar country, he knows only that he must get back to his family.

Jack races through back alleys as the violence follows him. In short order he hears the horrific sound of attackers yelling and victims screaming as their heads are crushed. While blood flows in the streets around and over severed limbs and bodies, Jack hasn’t the faintest idea where he is. Neither do we. He is hurtling through the darkness followed by screaming villains. Is this is a revolution? An invasion? A local uprising? We know only that Jack must find his family. And that takes him a very long time. Much too long.

By the time we meet Annie (Lake Bell) and their two daughters, we have watched the invaders destroy the hotel and murder its inhabitants. As we wait for something in the way of a plot to develop, we watch this family of four take to the back alleys again. They run, they hide behind things and run some more. They lose each other, are wounded and nearly captured and still we have no idea of the why of any of it.

If you think this is a long review about nothing, that is the whole problem with the movie. It’s an excruciatingly long and violent ordeal lacking any explanation whatsoever until, near the very end, Hammond (Pierce Brosnan) appears – armed and able – to explain the problem and steer the family to the river that might lead to freedom.

Brosnan is endowed with all the nonchalant charm of Colonial Brits who spent years in outposts and knew the real stories that lay beneath the politics of the country where they were stationed. He’s fun to watch as the bearded, rumpled Brit who understands what’s happening. Owen Wilson does as well as anyone could with the role of a terrified father forced to his own brutality in order to save his family. Lake is quite interesting as the protective, helpless mother transformed into a woman enraged and driven to violence.

If you are wondering how a movie without a plot can be so frightening, you must credit director John Erick Dowdle’s creation of an earsplitting soundtrack that intensifies the effect of the relentless brutality. Should you go? Your choice, not mine.