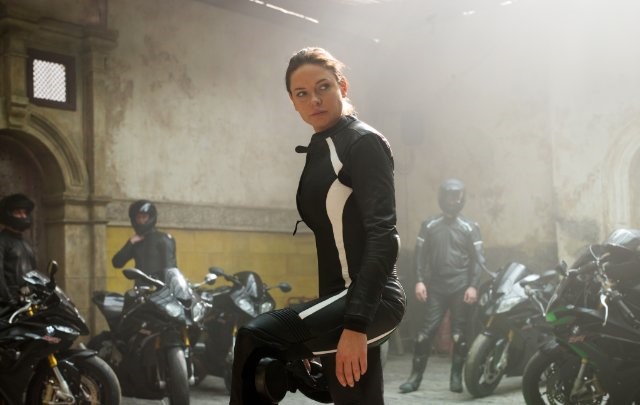 If you are among the many who avoid summer blockbusters, you might want to reconsider. Unless you are made of cold stone, Mission: Impossible – Rogue Nation just might be the exception to your rule.

The bulk of the credit goes to Christopher McQuarrie who wrote an intricate script studded with surprises. When the film opens with Tom Cruise clinging to the side of a plane as it takes off, it’s easy to chuckle and think we’re in for a standard summer thriller. Wrong. Within a few minutes, the unexpected twists of Mr. McQuarrie’s story have made us forget where we are.

Imagine villains and heroes trying to outsmart each other in the fascinating jungle of beams, bars, and curtains above the stage in Vienna’s opera house as Turandot wends its beautiful way, undisturbed (for the moment), on stage. We are actually in the Staatsoper listening to Turandot as we hang from a curtain above the stage.

This movie was filmed in Vienna, London, Malaysia, Casablanca and Marrakech with entire production teams recruited in each location, and I promise that it is done so well you believe absolutely that you are there with the principals in each location.

In a movie that is not just improbable but impossible on every level, we find ourselves absorbed in tracking both the characters and the technology that is tripping them up. The audience is in the path of a prolonged avalanche of irresistible, even subtle plot twists.

Ethan Hunt (Tom Cruise), William Brandt (Jeremy Renner), and Benji Dunn (Simon Pegg) are leaders of the IMF which is now under attack by The Syndicate, an international rogue organization. It’s a battle between the world’s two most highly skilled underground intelligence agencies with the good guys threatened by the determination of CIA – under director Alan Hunley (Alec Baldwin), to defang the IMF by bringing it into the CIA. Be warned that Sean Harris’s Solomon Lane, leader of The Syndicate, is a worthy successor to the James Bond villains. He of the creepy voice and nasty thoughts is a horrible original we can detest forever.

If all that isn’t enough, meet Rebecca Ferguson who plays Ilsa Faust, an enigmatic female intelligence operative who surpasses the guys in both intelligence and physical skills. Who is she? Whose side is she on? She’s terrific.

The fascinating gizmos, gadgets and motivations, all born of our new technological culture, spark and hold our fear and curiosity. With this particular blockbuster, it’s time to measure our aversion to summer madness against the fun of characters who jump alive in the hands of good actors.

As the movie ends in a marvelous scene that is an ingenious repetition of the opening, we are anticipating the next shock when suddenly the credits roll and we realize we have just been set up for the next Mission Impossible, and that is something to look forward to – as long as Christopher McQuarrie writes and directs.