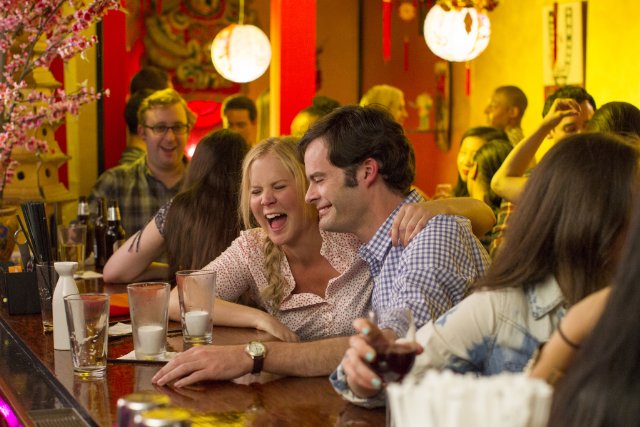 Amy Schumer blasts into the mainstream with Trainwreck, the perfectly titled explosion of comic vulgarity that upends traditional romantic comedy. The fun of this pile of raunch lies in Schumer’s self-mockery. With cheeky exaggeration she takes on the experiences people never talk about and plants herself as the target of the joke. This woman is in charge of her dalliances, until she isn’t.

Trainwreck would have died under the censor’s knife just yesterday, but today it rides in on the wave of the new culture where anything goes. Awash in her own anxieties, Schumer turns the story into verbal weaponry delivered as physical comedy. It is raw, but underneath the raunch lies a sharp commentary on contemporary courtship. It works because Schumer chooses to kid herself rather than to deliver a sermon.

In the proudly autobiographical story, she plays Amy, a woman so afraid of commitment that she makes sure she goes home after each of her successful hookups. She works for a magazine that specializes in shock and is assigned by her monstrous editor, Dianna (Tilda Swinton), to interview Aaron (Bill Hader), a straight, serious doctor who mends injured athletes when he isn’t working for Doctors Without Borders (how’s that for purity?).

After years of avoiding commitment with dolts, she is interviewing a guy who pierces her defenses with his shyness. When she feels herself falling for him, she resorts to all kinds of tricks to destroy the possibility of romance. “I’m broken,” she finally says, and finally announces her surrender in an ironic comic triumph on the basketball court.

Schumer and Director Judd Apatow have drawn celebrities to the cast to add to the fun. LeBron James is a real surprise as Aaron’s patient who becomes his friend. Their one-on-one interlude on the basketball court is genuinely funny primarily because neither comments on its ludicrous aspect. Marisa Tomei, Daniel Radcliffe and Amare Stoudemire are on board with less success.

Bill Hader is irresistible as the doctor too good to be true, and Amy, while not at all irresistible, shouts to the world that women are no longer merely collectibles. Men can be fools too. After centuries of the reverse, it’s fun to see a woman calling all the shots – until finally she doesn’t want to.

If Trainwreck isn’t a good movie by ordinary standards, an uninhibited dame taking on the old culture wins the day. Whether or not you like it, you’ll see quickly that it is a game changer. After succeeding mightily on television, Amy Schumer has announced to the world that she is the uncensored comic voice of the moment. She opens the gates.