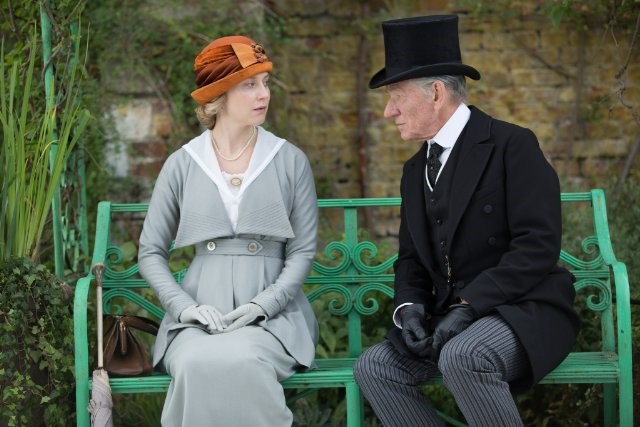 It is easy to say that Mr. Holmes is a story about our favorite detective as he struggles to remember the details of an unsolved case. It is that, but it is also a beautifully filmed character study of four actors who deliver deeply moving performances. Director Bill Condon pulls the threads together in a perfect assemblage of story, camera, and performers and then lets it all unfold slowly while we absorb the beauty.

At 93, Sherlock Holmes (Ian McKellen) is living in Sussex with his housekeeper, Mrs. Munro (Laura Linney) and her quiet, extremely bright son, Roger (Milo Parker). Determined to break that unsolved case, Holmes searches through his mental fog for clues that will bring resolution.

With a minimum of dialogue, the frail old man and the young boy build a rare and beautiful friendship as we watch them exploring the lessons of Holmes’ apiary. As he teaches the boy about the extraordinary relationship of bees to health and well-being, they become mentor and student with shared passions. With his inquisitive mind and appetite for detail, Roger is an embryonic detective. Before long, the two are applying their insights to a path strewn with strange clues.

Roger’s mother, on the other hand, knows that as the frail old man fails, her job and her ability to support her son will be endangered. She makes plans to move. Laura Linney paints an affecting portrait of dutiful caretaker to her son and to Mr. Holmes. Called upon to move from dour acceptance to eventual joy, she makes Mrs. Munroe a strong woman who must make a plan in the face of circumstance.

In the intriguing plot line, Hattie Morahan plays Ann Kelmot, the mystery woman in the story Mr. Holmes is trying so hard to reconstruct. She makes Ann the riveting central question in Holmes’ resolution of the mystery.

As Mr. Holmes at 93, Ian McKellen is quiet, guarded, and frustrated by his weakened memory. In flashbacks where he plays Holmes at 63, he is active and fully alert. Writing the story as he explores its fragments, his is a grand creation of a determined old man. But the real core of this movie is his relationship with Roger. Boy and man build a friendship based on intuition and rooted in subtlety. It is a beautiful thing to watch.

You need go no farther to understand this than the exchange between the two when Holmes hints to the boy that he won’t be alive for long. When Roger answers that he had a great uncle who lived to be 102, Holmes asks “What are the odds of knowing two people who lived to be 102?” The boy quickly says, “I didn’t really know him.” .

Director Bill Condon, writer Jeffrey Hatcher, cinematographer Tobias Schliessler and their teams have created a beautiful atmosphere, both emotional and actual. With that inspired support, four actors in quiet harmony have handed us a movie to love.