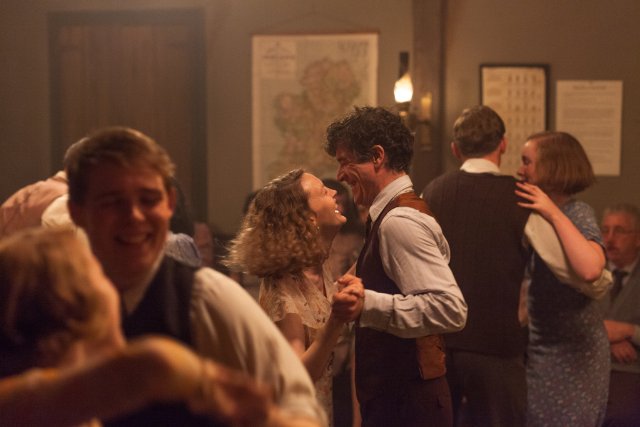 Jimmy’s Hall is a terrific movie about Conservative power vs Liberal youth in depression era Ireland. Director Ken Loach and writer Paul Laverty drop us back into the enduring argument with a flawless cast and luscious filming. Ten years ago, Jimmy Gralton (Barry Ward) was deported for the crime of founding a community hall that offended the entrenched church leadership. Now he has returned to help his aging mother run the family farm. It is 1932 and life for everyone is grim.

Still fueled by idealism, Jimmy and his old friends rebuild “Jimmy’s Hall,” as a gathering place for young people who have lost their jobs on the now disintegrating Irish estates. Jimmy is trying to equip them for jobs while injecting some fun into the bleakness of their lives. The hall becomes a place for dancing, singing, sketching, and learning. Jimmy introduces them to American jazz.

In a conflict that has played out repeatedly throughout history, the establishment roars its disapproval of anything new. In this case, in that year, it is the Catholic Church, supported by uniformed police, and those among the citizenry who take it on themselves to destroy the perceived threat. When Father Sheridan (Jim Norton) storms into one of these evenings accompanied by such a posse, guns are drawn, fists fly, and Jimmy is arrested.

By now we understand thoroughly the innocence and sincerity of Jimmy’s determination to help the young people of his town, and our appreciation increases as he urges Father Sheridan to join them so he can understand that what is new is not necessarily bad. It is an invitation to explore solutions for their town. But Father Sheridan brands Jimmy’s supporters as Communists, howls that the craze for pleasure is debasing Irish values, and denounces Jimmy’s Hall as the den of rebellion that it clearly is not. Always, Father Sheridan is invited, but his mind is small and closed to possibility. He comes only with the police.

Shifting abruptly and often between establishment anger and youthful joy, Director Loach paints the conflict in vivid colors at a fast pace. Credit actor Barry Ward with creating Jimmy as a leader whose idealism is tempered by a realistic streak. Ward and Simone Kirby do lovely work in creating a love from long ago that still lives within the limitations of their lives.

As always happens when one side refuses to negotiate, one wins, one loses, and resentments become deep and lasting. From one young man, “The hall is not just a building. It’s our heart and soul. We have to protect it for those who come after us.” You will be forgiven if this battle between entrenched power and idealism seems familiar. In the new clothes and accusations of 2015, it is the same old argument. The idealists plead for exploration, for resolution that can’t come when power stands fast. Enjoy this strong, quite beautiful film that reminds us that mankind never learns.