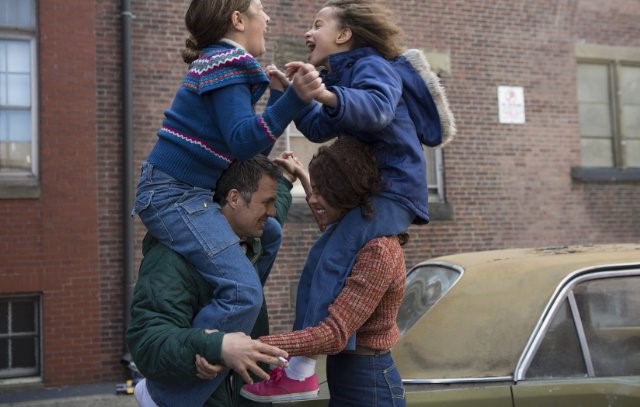 The bones of the story are clear. A bipolar father has a serious mental breakdown after losing his job. His wife moves to a small apartment to remove their two daughters from the marital chaos. All this unfolds in a bundle of complicated human emotions where no one is all right or all wrong. Shocked out of ordinary life and forced to rebuild, the Stuart family navigates a path through tough times. If humor seems impossible in this situation, just watch. That’s the lovely secret of this movie.

In the 1970s, a mixed race marriage complicated by the mental illness of its New England blue blood father is no easy matter. Cameron Stuart (Mark Ruffalo) is a sweet guy who brings flowers to strangers, appreciates beauty in life’s details, and leaves chaos for others to handle. Maggie (Zoe Saldana) carries the load of raising two daughters in a life made thoroughly unpredictable by her husband’s illness. After Cam’s serious breakdown, she moves with the girls to a small apartment in Boston.

Facing their financial future, Maggie suggests to Cam that he move back into the Boston apartment to take care of the girls for eighteen months while she gets her degree in Columbia’s MBA program in New York. Skeptical as we might be, we root for everyone in the risky arrangement because we already care about each of them.

The hugely talented Mark Ruffalo reaches for dignity and redemption as he creates Cam as a damaged fellow whose actions come not from cruelty but from what he perceives as the mistakes of others. His Cam is an irresistible concoction of irresponsibility, love, and inability to understand the problems he causes. Who wouldn’t love a father who spends a whole night sewing a flamenco skirt for his daughter to wear to her school audition?

Zoe Saldana’s Maggie is shrewd, smart, and brave as she engineers a possible solution to the curve life has thrown at her family. Imogene Wolodarsky and Ashley Aufderheide give us two girls caught in a situation way beyond their years that they manage to handle with spirited originality. The genuine feel of the story comes partly from writer/director Maya Forbes’ own experience in the 1970s when her bipolar father referred to his problems as “infinitely polar bear.” Now Forbes’ own daughter, Imogene Wolodarsky, plays her mom in the movie. Because these two come from the family that lived this script, the chaos in their on-screen lives is laced with authenticity.

There is no need in this story for the contrived drama that so often rolls from crisis to crisis from a writer’s pen. It is simply a tale of life dealing out a tough challenge while we watch with appreciation as they handle it with grace and humor. And if you don’t think you’ll smile and laugh through it all, just trust me, you will. Watch them make the best of every up and down of this emotional roller coaster.