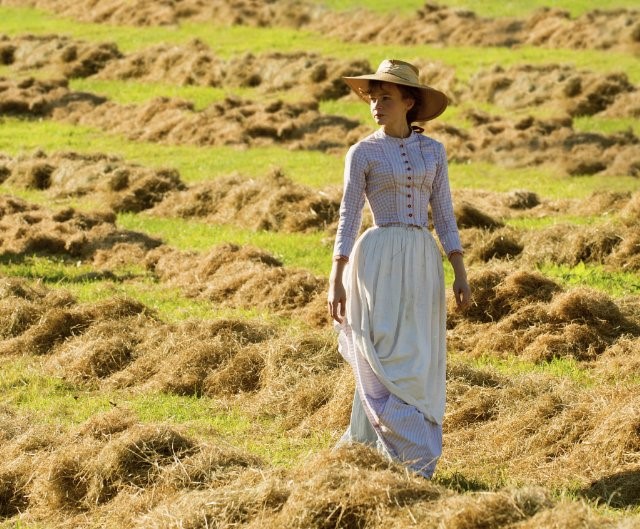 Bathsheba Everdene and Gabriel Oak have been revisited many times in print and on film, seldom more beautifully than in Thomas Vinterberg’s new production of Far from the Madding Crowd. Filmed in all variations of weather against the rolling fields of England under sun, shadow, and mist, the sight of it alone is enough to hold an audience. But there are reservations.

Because Thomas Hardy’s novel was serialized in The Cornhill Magazine, an important literary magazine of its time, we shouldn’t be surprised at the carefully spaced catastrophes that test the characters. With varying reactions, they brave storms, fire, and all manner of emotional crises. It is easy to imagine each Cornhill installment leaving its audience anticipating the next issue.

Bathsheba Everdene (Carey Mulligan) operates outside the dictates of her culture. She rejects the proposal extended by Gabriel Oak (Matthias Schoenaerts), “Mr. Oak, I don’t want a husband.” When she inherits her aunt’s farm, we watch her tackle the challenge of running the place. She addresses the large crowd of workers who sow, pick, and sell the crops at market with “It is my intension to astonish you.”

The movie unfolds in parallel stories, Bathsheba’s and Mr. Oak’s – she, determined to build a successful farm, he, to rebuild the life he had as a prosperous shepherd before his sheep were lost in a terrible accident. Oak is a man of few words and abundant courage as he battles storm and fire while burying his feelings for Bathsheba.

Director Vinterberg focuses his cameras on Carey Mulligan’s Bathsheba repeatedly for long periods while we hope for enlightenment about her inner drives and needs, but we learn little more about her than her independence. When she begins a flirtatious exchange with Sergeant Troy (Tom Sturridge), the only possible reaction is skepticism. She’s too smart for this scoundrel. At the outset she may not know he is a gambler, a liar, and a philanderer, but she should because Tom Sturridge makes Troy an obvious cad.

Unfortunately, Sturridge can’t pull off the scene where he lures Bahsheba to the woods for an interlude of swordplay as foreplay. We understand well that the independent Bathsheba could fall for a dashing soldier, but this soldier is badly miscast. She wouldn’t have believed him for a second.

That leaves her with the marriage proposal by Mr. Boldwood (Michael Sheen), her prosperous, eligible neighbor who seems afraid of his own shadow as he offers Bathsheba his hand and material pleasures. In reply, she assures him: “I have a piano, I have my own farm.”

In the face of contrived emotional subplots, we are left with the extraordinary sight of a working farm and the army of people required to make it work. Their efforts to keep the place afloat in the face of serial disasters are far more absorbing than the romantic dilemmas unfolding in their midst. The movie belongs to Carey Mulligan and Matthias Schoenaerts who understand quiet strength.