A Feelgood Story
An Illusion Review by Joan Ellis 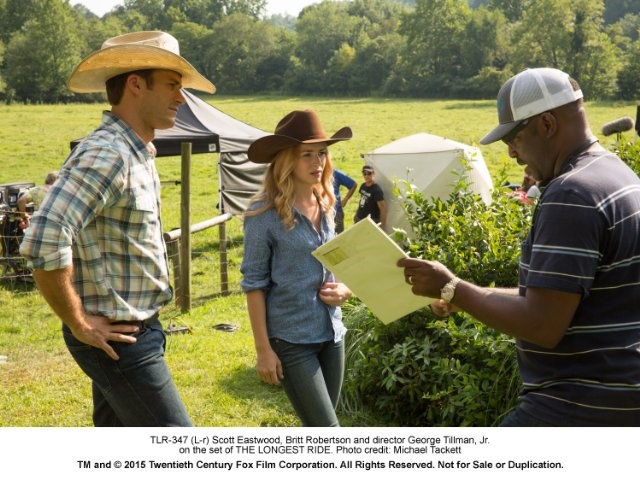 If Nicholas Sparks is reliably predictable and sentimental, he saves himself – almost – in The Longest Ride by giving us a collection of dissimilar characters. We have the fun of watching Oona Chaplin, Scott Eastwood, and Jack Huston, offshoots of Hollywood royalty, as they grapple with an unwieldy plot. And we have the undiluted pleasure of watching Alan Alda save the movie from collapse.

That crazy plot? Sophia (Britt Robertson) and Luke (Scott Eastwood) make eye contact (that’s all it takes) at the rodeo where Luke is riding Rago, a fierce bull that throws his rider into a wall. That violent incident is followed by another – a car crash that injures elderly Ira Levinson (Alan Alda).

Sophia and Luke, a compassionate pair, visit the injured stranger in the hospital. A chord is struck when Sophia returns to the hospital with a box of Ira’s letters to his wife Ruth (Oona Chaplin). From that moment forward, the movie switches between Luke and Sophia’s growing romance and Ira’s memories of his younger self (Jack Huston) with Ruth. We have an interesting look at Ruth’s pre-war life in Austria as well as her life with Ira after she came to America as an escapee from the Nazi purge.

The scenes of the growing friendship between Alan Alda’s Ira and Sophia trigger flashbacks that are welcome because they aren’t predictable. The flashbacks switch to Jack Huston’s young Ira and Oona Chaplin’s Ruth each creates a character who holds our interest. The story that unfolds in flashback is what makes the movie work. Both Alan Alda and Jack Huston create the young and old Ira in ways that are believable and often touching.

Britt Robertson is very good as Sophia but we do puzzle about the outcome of her exciting job offer in New York vs. staying with Luke as he tries to win the world championship of staying on top of a bull. The problem in that equation is that Scott Eastwood is a tall, handsome guy who is nearly as unexpressive as his beloved father. By way of personal confession, I admit to thinking Clint’s lack of animation when he played Rowdy Yates in the ‘60s would doom his career. So much for my judgement. Still, I’d take the job in New York.

Though the long scenes of bucking bulls are riveting, they unfold under the giant question mark of why anyone would want to invite certain injury by trying to last eight seconds on the back of an animal who is in a monstrous rage. Things you don’t have to worry about: Will the young lovers stay together? Will Luke finally last eight seconds on the back of Rago? Will Nicholas Sparks find a way to wrap it all up with a smile? Though the ending is Nicholas Sparks at his most sentimental, you may well enjoy it because by now you will probably like his characters. No villains here.