A Search for Justice
An Illusion Review by Joan Ellis 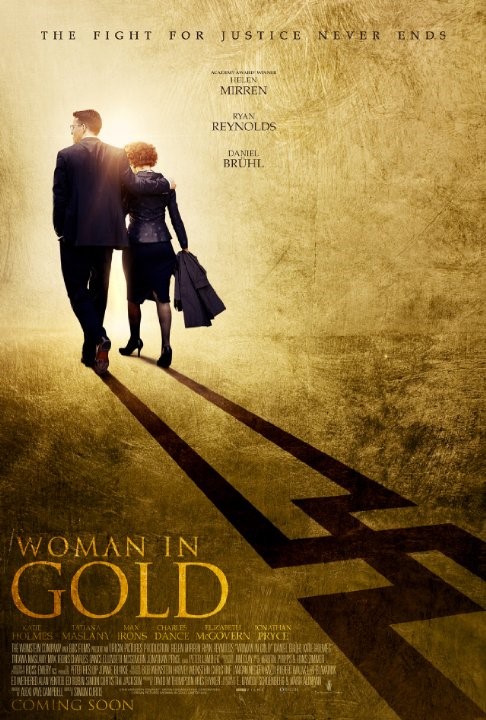 “It’s not just stolen art. It’s a symbol of stolen life.” So said Helen Mirren about Woman in Gold where she plays Maria Altmann who escaped from Nazi controlled Vienna with her new husband shortly after their wedding in 1942.

Maria’s family had civic prestige, money, and a beautiful house in pre-war Vienna. Her aunt – Adele Bloch-Bauer – had been painted by Gustav Klimt whose portrait of her hung with four others in the Altmann town house until the Nazis invaded Vienna and plundered its art. After the war, it remained in Vienna’s Belvedere Palace for sixty years. This is the story of Maria’s struggle to recover ownership of the fabled portrait.

The movie has been called sentimental by critics. Others have said it overstates the warmth of the welcome extended by the Viennese citizens to the Nazi invaders. On the first count, the actual truth of Maria’s determination is, by simple definition, packed with such genuine emotion that anyone not moved by it is probably either unreachable or too young to understand what happened in a war that shook the world before they were born. For them, it is history. For many Americans, it lived in the newsreels of the moment. On the second count, the reality is that Austria has lived in the shadow of that welcome for over seven decades.

I would urge people to put those criticisms aside and allow themselves to be moved by a true story brought to full life by a grand cast headed by Helen Mirren as Maria Altmann and Ryan Reynolds as Randol Schoenberg. They are supported beautifully by Daniel Bruhl, Allan Corduner, Katie Holmes, and a handful of others who will touch you greatly unless you too are unreachable.

In the early scenes, Ryan Reynolds seems entirely too contemporary and American to be the grandson of composer Arnold Schoenberg, but his is a typical story of the Americanization of a third generation of families who escaped wartime Europe. When he and Maria undertook their search in the 1990s, he was an ambitious American and she, at 84, was an Austrian Jew who survived by fleeing the family and country she loved. The ancestry that meant little to Randol as an aspiring American lawyer, claims him during their time in Austria as he understands what happened during the Holocaust to his family, to hers, and to their country.

On the arduous way to the U.S. Supreme Court, Maria and Randol by turn encourage each other in what seems an impossible cause. Helen Mirren is restrained and powerful as she and Reynolds build a friendship that is both prickly and unlikely while facing one setback after another until, finally, they win.

The critics who are writing venomous reviews should be reminded that this is the way this story happened. If they persist in remaining cynical, send them off to see the Trans-Lux newsreels of the invasion of Vienna. It’s all right there.