Corporations vs Scientists
An Illusion Review by Joan Ellis 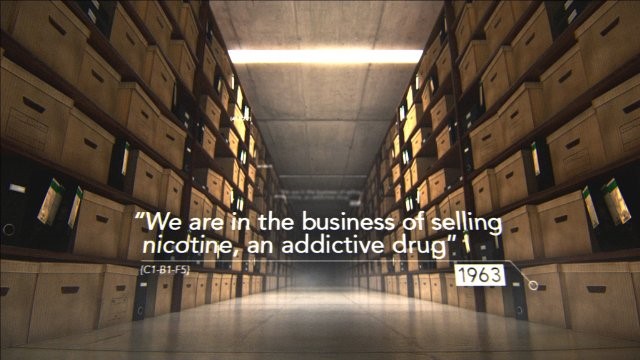 Merchants of Doubt is a sobering view of American corporate power. This strong documentary begins with an exploration of how the tobacco industry managed to overwhelm science with money for five decades.

One example: when public opinion began to ask the industry to develop a self- extinguishing cigarette to cut down the number of house fires caused by people falling asleep while smoking, the tobacco companies refused and campaigned instead to infuse furniture and clothing with flame retardant chemicals. Small children went to sleep after that in chemically saturated pajamas while their parents soaked up poison as they sat on treated couches.

As late as 1994, tobacco company officers testified under oath before Congress that nicotine is not addictive. At this point, tobacco was killing a half million people each year while corporations spent millions on hired lobbyists to prove tobacco was not the cause.

The film moves on to the now thoroughly politicized issue of climate change. In 1988, climate scientists testified that the cause/effect equation of the greenhouse gas blanket is at the root of the problem. Twenty-seven years later scientists see CO2 as the root cause of the blanket that is enveloping us while corporations insist it is a harmless gas. Sound familiar?

The core of this film lies in live interviews with the lobbyists who admit they cherry pick data in order to build a case for the people who hire them. Most of the lobbyists interviewed are still rooted in the anti-Communist emotion of the Cold War era, often labelling the climate change movement as Socialist/Communist. The debate, the movie holds, has become an entirely political one about corporate fear and hatred of any regulation by the government. And so you have the scientists (who are not a polished group of speakers) vs the Cato Institute whose twisting of scientific data is exposed in a blistering revelation.

One lobbyist admits his stories were manufactured anecdotes that he told in exchange for $240,000. “I wasn’t under oath,” he said. Three corporations funded “Citizens for Fire Safety,” to promote retardant chemicals for clothes. Think tanks were created for the purpose of tailoring data to support a political conclusion. Though scientists have neither the money nor the skill to respond in kind, they attack what they see as the corporate lie.

Former oil company lobbyist Bill O’Keefe, CEO of the George C. Marshall Institute, shapes arguments into weapons for his clients – “We’re fighting regulation in the name of freedom.” Conservatives see the science of global warming as an attack on their way of life, an undermining of the economic system. Scientists see the approaching loss of coastal cities like New York, Tokyo, Boston, Seattle, San Francisco, and Miami.

It took five decades for the public to catch up with the truth that tobacco companies designed their product to be addictive. The scientists’ point: we don’t have fifty years to prove this one, and we’ve already used up twenty-seven.