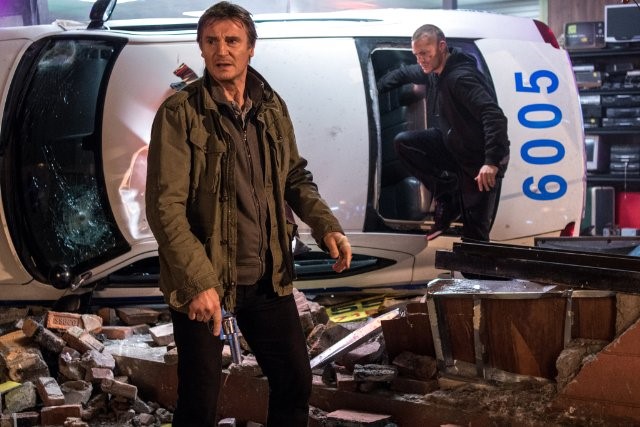 You will have to work hard to keep track of the characters in Run All Night because just as you think you know one, he will be shot, burned, mutilated, or beaten to death in grisly detail. This is a movie of unrelenting brutality punctuated by short bursts of conversation rather than the conventional reverse.

The violence is even more consuming because the acting is impressive. Liam Neeson plays Jimmy Conlon, a retired professional hit man known as “the Gravedigger.” He is now broke and drunk and if there is anything this sharply intelligent actor can’t pull off, its being a broke drunk. When he springs into lethal action on behalf of his son, he becomes thoroughly convincing as an intelligent killer.

Back in his mob days, Jimmy worked as a contract killer for Shawn Maguire (Ed Harris), a fellow retiree trying to deal with his own son who went into the family business. The simple equation in a complicated movie is this: Two fathers – former friends – plunge into mutual hatred when one son is killed and the other survives with a mob mark on his back.

Joel Kinneman plays Mike, the good but resentful son who never knew his father. Boyd Holbrook is so frightening as Danny, the son gone wrong, that it is hard even to imagine he might be a normal guy when he’s not acting. Credit Genesis Rodriguez as the wife of the good son and Vincent D’Onofrio as an honest cop in a corrupt bunch.

By the time we have figured out the relationships among the four principals, we have watched a cast of dozens kill each other. Heads explode, limbs are sliced, blood gushes from everywhere. The big question for me is: who wants to watch this kind of mayhem for two hours? It’s at that point that some of us, I for one, say “no thanks.” But others look at it quite differently.

The gangster movie has been a popular genre for years in the tradition of Jimmy Cagney in White Heat and Scarface. A movie set in the underbelly culture of guns, gambling, alcohol, drugs, and money can succeed. But I question whether the collective appetite of audiences has kept pace with the technology that produces gore in these extremes.

That said, any movie with Liam Neeson and Ed Harris heading the cast is going to be an acting victory, and it certainly is that here. This is no ordinary trash. The rushing shots of New York reflect the frenzied action unfolding below. The premise of two former mobsters closely bonded in loyalty and suddenly ripped apart by circumstance is a good one. Two fathers protecting their sons against all comers is an understandable equation. The question, in this age when the camera can be made to do anything, is this: why bombard our collective imagination with constant imagery that blots out the creativity of a group of really accomplished actors and fine writers?