Junk or Fine? You Decide
An Illusion Review by Joan Ellis 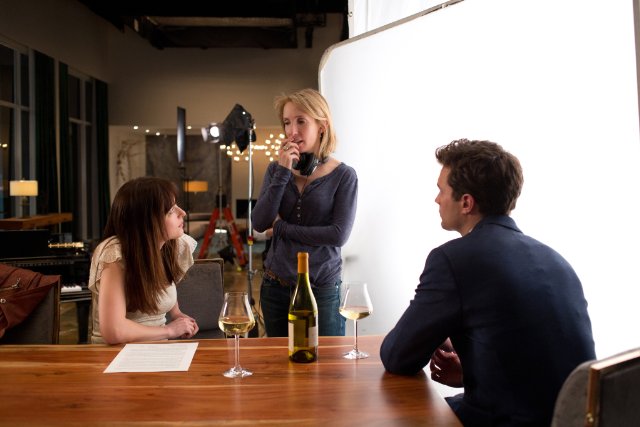 In the South where evangelicals have roared orders to stay away from the film, theaters are packed (mostly with teenage girls). The opening weekend brought in $90,000,000. Many who would dismiss both the books and the movie as trash find themselves interested. So let’s take a look.

Anastasia Steel (Dakota Johnson) studies literature, works as a clerk in a hardware store, and subs for her roommate at Grey Enterprises where she works for its president, Christian Grey (Jamie Dornan). The English major and the billionaire are immediately intrigued, each by the other. As they walk about, they pass Christian’s toys: cars, planes, helicopters, buildings, silent servants.

Dakota Johnson and Jamie Dornan set out to save the movie from the expected disaster. Johnson is credible as an English major. She makes it clear that she is uninterested in Chris’s toys but very curious about the man himself, and yes, she would like very much to become an experienced woman. First with delight in ordinary exploring, then with curiosity and pleasure in Chris’s secret pain palace, Johnson creates a curious, willing adventurer who also sets limits. In a movie that is hardly about brain power, she empowers her character with both a brain and humor. She makes Anastasia interesting and unpredictable.

In this culture of instant communication, will teenagers risk real trouble by playing games with cuffs and ropes? It’s not the sex that’s the problem in this era of ready availability. The real question: to what degree will bondage breach the mainstream? A British fireman has already urged young people not to play games with handcuffs lest they be left hanging there abandoned in a lockup by their own version of Christian Grey.

Certainty: you’ll fit somewhere on the long fluid line between enjoying and disliking this movie – perhaps midway in self-protective mockery – but the expected disaster is averted by director Sam Taylor-Johnson and a game Dakota Johnson. Their movie is a carefully crafted announcement that from now on, nothing on screen is off limits.