A Brutal Lesson
An Illusion Review by Joan Ellis 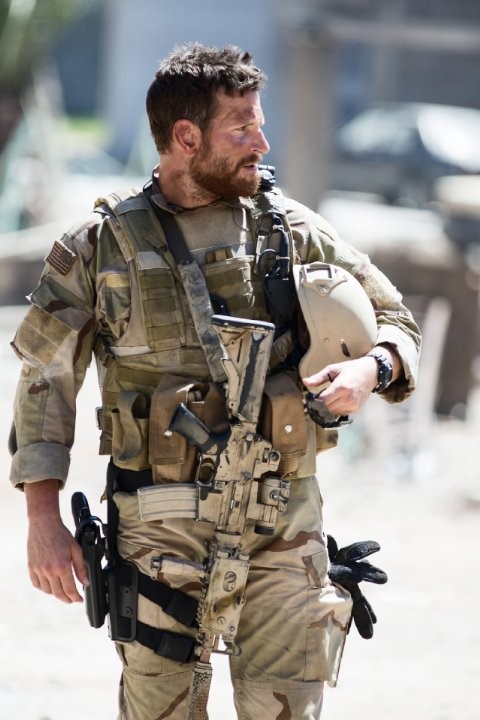 There is no way to stay neutral while watching American Sniper. Take the early scene of a father (Ben Reed) teaching his 8 year old son how to shoot a gun and then how to kill a deer. Some will think, “Good job, you’re teaching him well.” Others will shudder at putting guns in the hands of children in our violent society. And some will be repelled at the killing of a beautiful fawn by a gentle boy.

The young boy grows up to be Chris Kyle (Bradley Cooper) who rides broncos in rodeos until the 9/11 attacks trigger a deep sense of patriotism that probably grew from his father’s careful training. Chris joins the Navy SEALS. After his group grows together as a team during an unimaginably tough training period, Chris heads off for four tours as a sniper in Iraq where he notches a record 160 kills and becomes a legend.

It’s here that the audience may once again feel divided between Chris’s patriotism and the executive decision to send thousands of young men to Iraq on the basis of a lie. There were no weapons of mass destruction in Iraq. Once there, can any soldier be blamed for doing his duty on the battlefield?

But Bradley Cooper’s Chris Kyle, carries us up and over these questions with his own stiff code. In the split seconds available for deciding whether the victim in his site is wrapped in a bomb, his instincts tell him to hesitate, to make sure. And what if he’s wrong?

It is on home leave between tours that we get to know Chris’s wife Taya (an excellent Sienna Miller) and the American domesticity Chris has left behind in order to serve in Iraq. He has agonized over every kill – are they suicide bombers or not? And when he comes home between tours to become a suburban husband and father, he tries to forget the 160 kills and the men he has watched as they die. He can’t.

It is no surprise that director Clint Eastwood has created brutal battle scenes, but it is a surprise that he emphasizes issues of conscience so strongly. As we watch soldiers and civilians die in terrible pain, we wonder if Mr. Eastwood is actually asking us to think about the injustice of sending young men to die for the whims of their elders. Count the Executive wars fought since WWII and ask what was gained. Korea, Vietnam, Iraq, and Afghanistan. Why?

Bradley Cooper, in a terrific performance, gives us all the shadings of a good man whose inherent decency and loyalty to country are being corroded by war. His performance forces us to confront the dilemmas and the damage we don’t understand.

Clint Eastwood’s victory here lies in finding two actors as smart as Bradley Cooper and Sienna Miller to represent the SEAL and his troubled return to his wife and ordinary life with a damaged heart.