A Brave Performance
An Illusion Review by Joan Ellis 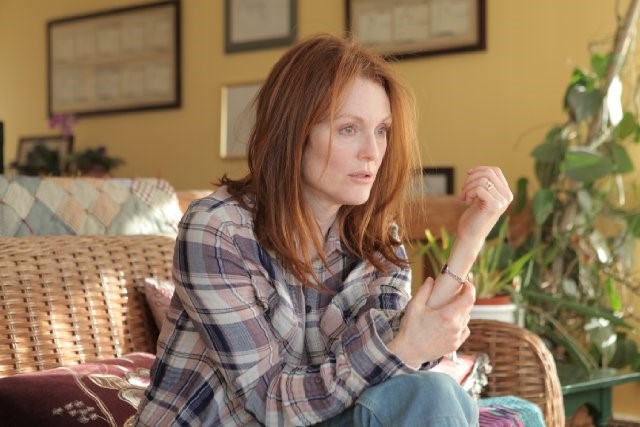 Creating a film about an Alzheimer’s patient is both risky and brave. Still Alice takes the risks and wins. With extraordinary subtlety, Julianne Moore delivers a provocative film about a subject we avoid. Few of us want to think about a disease that needs to be “managed” in the absence of a known cure. In a beautiful Oscar nominated performance, Moore takes us there.

We meet Alice Howland, an accomplished linguistics professor at Columbia University. In the middle of her lecture, her brain empties for just a second and she loses her bearings. Concerned, she visits Dr. Benjamin (Stephen Kunken), a neurologist who tests her thoroughly in order to rule out other possibilities. What’s left is Alzheimer’s.

As she faces her family, we watch her tell them about the high odds of the inheritance factor in this disease no one understands. Daughter Anna (Kate Bosworth) and her husband are trying to get pregnant; daughter Lydia (Kristen Stewart in a particularly fine performance), is arguing against her mother’s hope that she go to college instead of trying to become an actress. Son Alec (Hunter Parrish) plays a relatively minor, if sympathetic role in Allice’s life. Husband John (Alec Baldwin) loves his wife but is also dealing with an exciting job offer from the Mayo Clinic in Minnesota. He juggles his concern for Alice with his pursuit of his own career goals. We watch the family move from shock through various degrees of annoyance to deep compassion. But this story is about Alice, not her family.

Watching Alice think is Moore’s greatest gift to the audience. The intelligent academic shrinks gradually, undermined further by each new lapse that erases pieces of her thought process. We watch her slide from sharp lecturer to thoroughly diminished woman as she loses words and then her confidence.

The process is dismal, the end result tragic. From losing her way on her daily campus run to becoming lost in her own house, she never knows what form the next damage will take. When daughter Lydia asks, “What’s it like”? Alice replies, “Thanks for asking.” That’s the answer to the question on the minds of all who are watching because, although she shouldn’t, we know she feels shame. And then, “I am struggling to be a part of things, to stay connected to who I once was.” And try she does until she no longer can.

Julianne Moore takes us on the journey of a strong, vital woman from full life to empty vessel and she does it with nearly imperceptible changes of expression. Her diminishment, both physical and mental, is gradual and terrible and you will understand her when she says, “I wish I had cancer; it’s acceptable.” Moore succeeds in forcing us to understand the power of the destruction of the brain by a process that no one in our advanced technological world yet understands. She has lost her mind and no one can help.