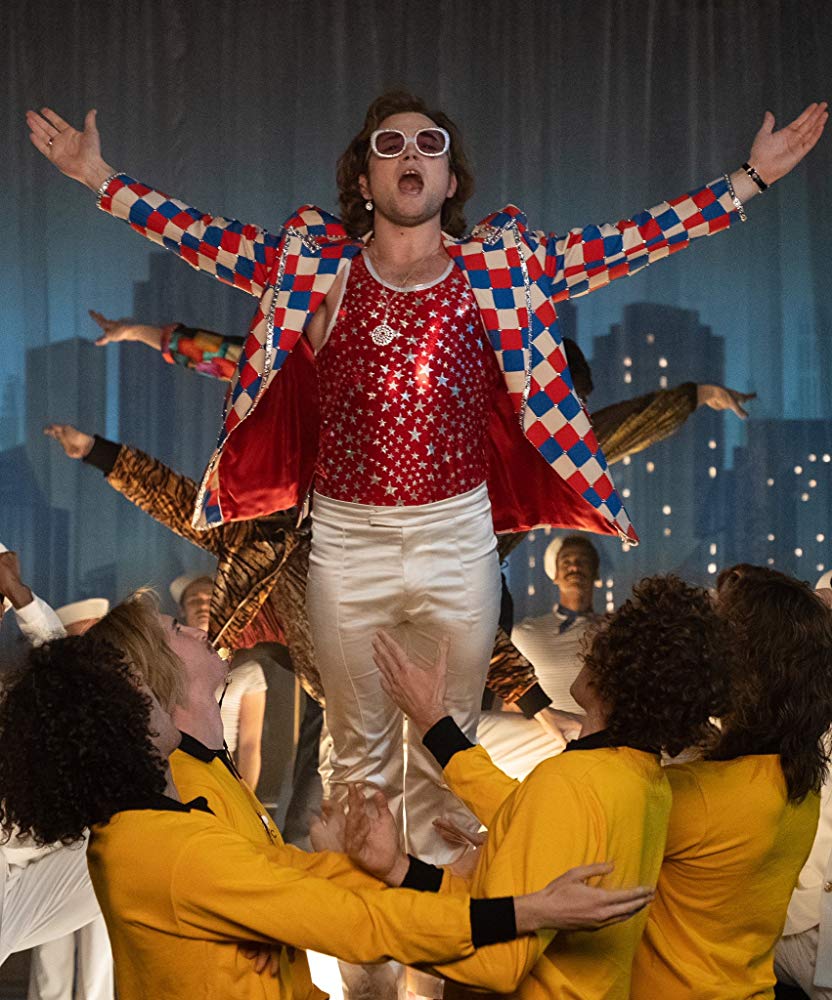 Though The Souvenir and Rocketman are polar opposites, perhaps one of the two will appeal to some of you in this strange movie summer.

Rocketman features a shy man who suffers the effects of fame as he learns to live with his success. He is beautifully acted by Taron Egerton who takes Elton John on the journey of a shy man trying hard to adjust to his new success as a singer through a bad period of alcohol, cocaine, sex, drugs, and anger. There is an air of inevitability about all this. He grew up with two nasty, selfish parents while music kept bursting out of him. He had no emotional support. His friend Bernie (Jamie Bell) sustains him in adulthood.

The early scenes of the boy’s magical music ability in that grim house are very moving and make us care deeply about this boy/teen/adult as the story unfolds in bars while he becomes famous through his ability with rock, soul, country and western. The boy becomes Elton John singing to crowds and sinking into alcohol, fame, and aloneness.

Though alcohol trouble usually weakens movies, this one’s central character is played with such extraordinary musical talent by Taron Egerton that the story soars whenever he is onscreen – drunk or sober. Egerton delivers the singer’s talent and his innate decency so well that we are held by him throughout. He captured us in the early scenes as a boy prodigy with no one in his home to encourage him. As the strength we saw in him as a boy resurfaces, the audience grins in pleasure and most are dancing in their seats. Be sure to stay for the credits that update the audience on Elton John’s several decades of sobriety and musical success.

In rare unanimity, The Souvenir won the first-place crown at Sundance and has received ten reviews of 100% from top critics. What fun, I thought, to see a winner. On that day, my eagerness gave way to deep disappointment. All but a handful of us had walked out. The movie was made by real pros and that’s exactly how it felt – a handful of experienced, talented original filmmakers and actors rooted in the assumption that their audiences would understand their experimental movie.

A young film student named Julie (Honor Swinton Byrne) picks as her lover a complicated mess of a man. That would be Anthony (Tom Burke). The fine actor Tilda Swinton appears infrequently with her real life relative. The movie needs more of her. What we get is a fractured story of an inexperienced Julie trying to make both a film and her own love affair work.

The whole movie is a string of scenes that begin and end without letting us in on what’s going on. Yes, Tom Burke delivers the rapid decay of a man and Honor Swinton Byrne gives us a fractured young filmmaker but nothing they do captures our interest or our hearts.