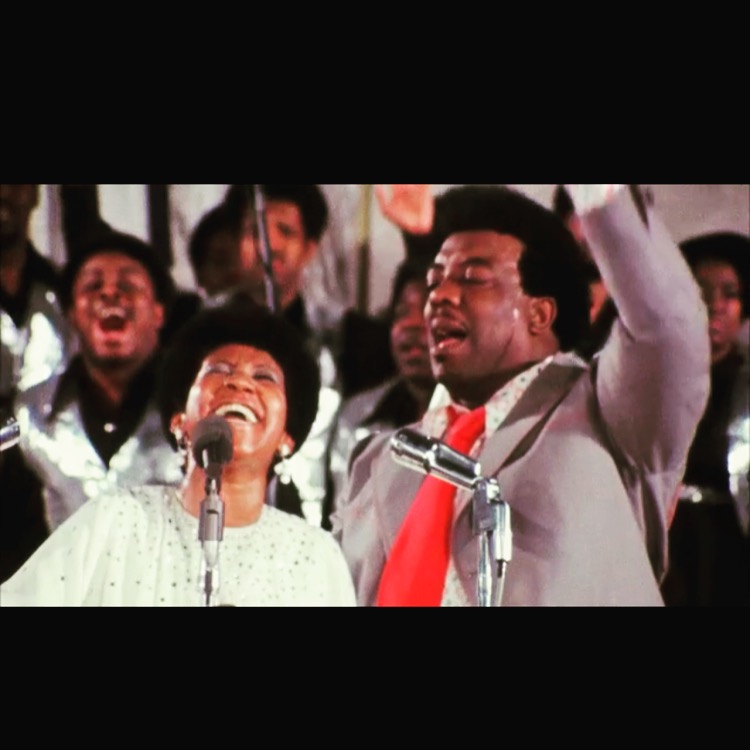 The simple fact: “Amazing Grace is a documentary that presents Aretha Franklin singing with a choir at the New Bethel Baptist Church in Watts, Los Angeles in January 1972.”

Here it is after being shelved for 38 years because of a complex mess of problems. One non-fixable block was the failure of director Sydney Pollack to understand how to sync images with sound. Back then, that could not be fixed. Add to that Aretha Franklin’s own refusal to allow release of the film that has now been released after her death at 76.

This documentary is intriguing on every level. With her career of multiple hits and gospel stardom secure, Franklin came to the making of this two-day documentary wrapped in quiet dignity and serious determination to record her musical career in two sessions. The two days unfold in an absorbing mix of confusion, talent, and emotion.

Reverend James Cleveland is the in-scene director while also playing the piano accompaniment for Franklin. We watch the extraordinary singer unleash the gospel winners of her career while the backup singers, spectators, and performers themselves express their appreciation and astonishment with great enthusiasm as they listen to their star.

On these two days in 1972, Aretha Franklin sings the songs she made famous in her youth. Even if you stand at a huge distance from this talent and the culture, just try to stop being moved as you watch it. Then ask yourself if what you are feeling isn’t a deeply genuine expression you never expected.

On both nights, the woman who reaches us wears flowing floor length dresses in beautiful colors and patterns that cover every inch of her except her face. What a contrast to the singers of today who stand stiffly in almost-no-clothes – the compulsory uniform for performers in our time. Franklin delivers her gift as she stands quietly behind the mike and we are both riveted and contained as we marvel at what we see and hear.

Though her stillness and dignity surprise us, the whole room is electrified every time she sings. Be sure to watch her hands when she plays the piano. The feeling is that this woman is an instrument of delivery for the inexplicable talent and rhythm that were part of her from childhood. Watch her father as he reminisces about the trip they took together when she was eleven.

As the camera shifts often among those assembled on screen – chorus, spectators, speakers – we watch the room full of individuals reacting with a heap of differing personalities. Some sing, some collapse, some swirl, and while they do, they are reflecting the rising excitement being generated by Aretha Franklin. She is a woman with deep natural dignity who sings from her heart with the voice she was given and learned how to use.

Anyone who sees Amazing Grace will feel grateful to those who rescued it from the oblivion where it rested for 38 years.