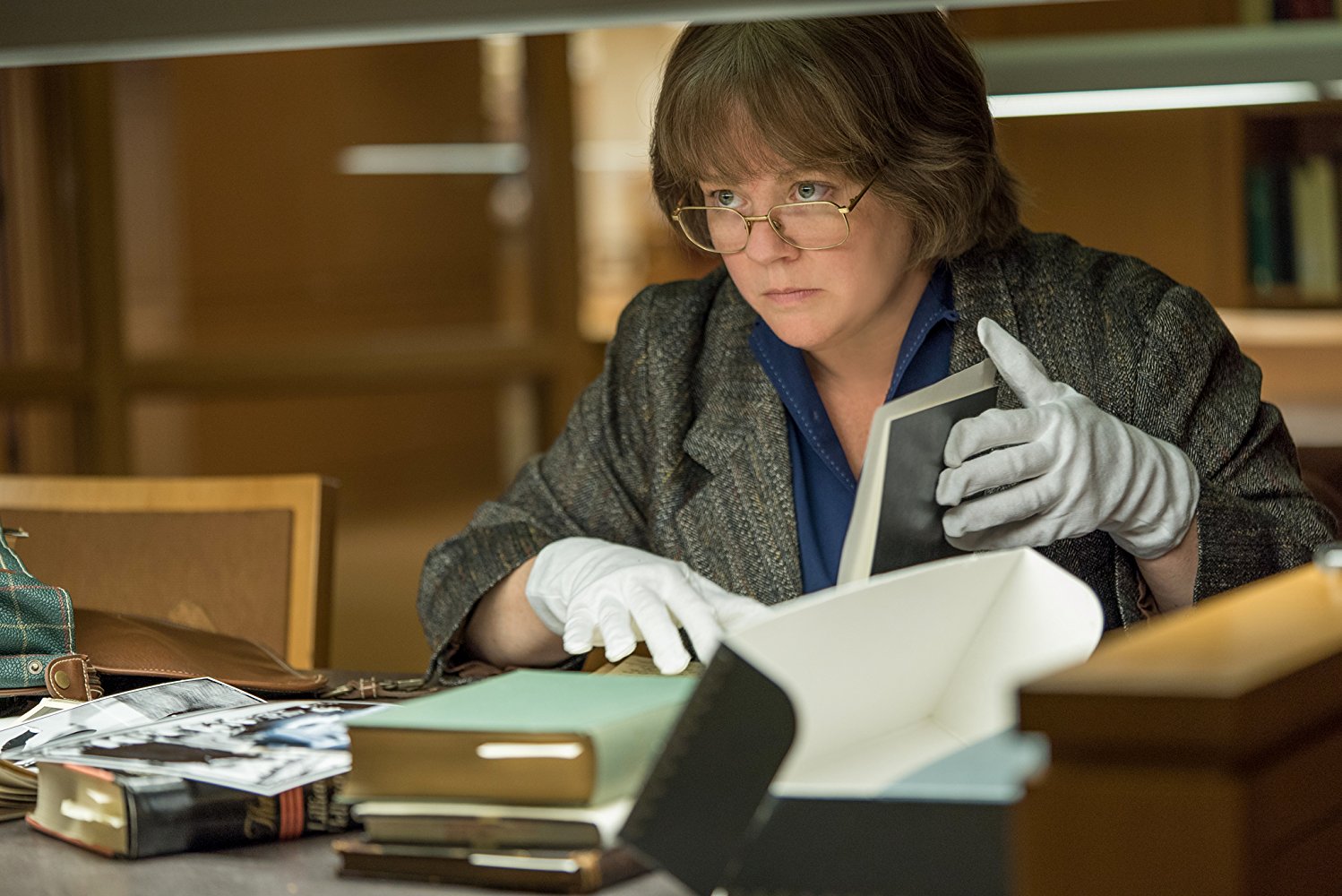 Can You Ever Forgive Me? is a story rooted in the truth of the life of writer Lee Israel. The movie is carried by Melissa McCarthy as Israel and Richard E. Grant as her accomplice, Jack Hook. I need to say up front that this one is drawing excellent reviews and appreciative audiences while adding that I found it very troubling. Here goes with my take on this movie.

At the opening in 1991, Lee Israel lives on 86th Street in Manhattan in a small apartment that she has no interest in enjoying. In every way, it’s a foul mess and she doesn’t care. She loves her cat and her work but she is in an emotional cave-in right now because her comical written improvements on the work of celebrity authors have become dated. She has known fine success in extending the writings of Tallulah Bankhead, Dorothy Kilgallen, Dorothy Parker, Noel Coward, and other literary beacons of their day. But by 1991, few in the public are interested in Israel’s articles about past celebrities. She is broke and discouraged.

And then – she takes to stealing original celebrity letters from libraries and bookstores and laces them with her own sense of humor and sharp writing. The next step in her plan: she sells the improved originals for increasing amounts of money. Jack, her homeless accomplice, develops even more sophisticated ways for her to sell the fake originals, moves into her apartment, and together they sell their forgeries of famous people. They get drunk regularly and plan further thefts. Their new business is growing.

My involuntary reaction was disgust. Is there any crime uglier than stealing the words of famous dead authors, adding your own cleverness to their work, and then selling it for publication – especially if it’s a true story? This story is rooted entirely in theft, fraud, and plagiarism and we are supposed to admire Israel’s formidable talent in navigating that ugly world. Surely in this non-fiction tale, a writer with her talent could have found a way to support herself other than heavy drinking with a thoroughly grim fellow loser as they plan attacks on dead authors.

But this movie is drawing appreciative crowds. If you find Melissa McCarthy and Jack E. Grant charming and funny, if you laugh through a movie that is the story of people who have no moral compass, then just dismiss my thoughts. It’s that simple.

If you think that you will enjoy watching Israel’s cleverness in an upbeat ending that lasts for just a few minutes, then go. With this character, Writer Nicole Holofcener and director Marielle Heller have taken women from their relatively new roles as intelligent ornaments, as opposed to boring ornaments, into the comically flawed roles usually reserved for men. Perhaps that’s progress. While I stewed in annoyance at two alcoholic plagiarists, Melissa McCarthy has invented a comically flawed heroine who has carried the movie and herself to Oscar nominations.