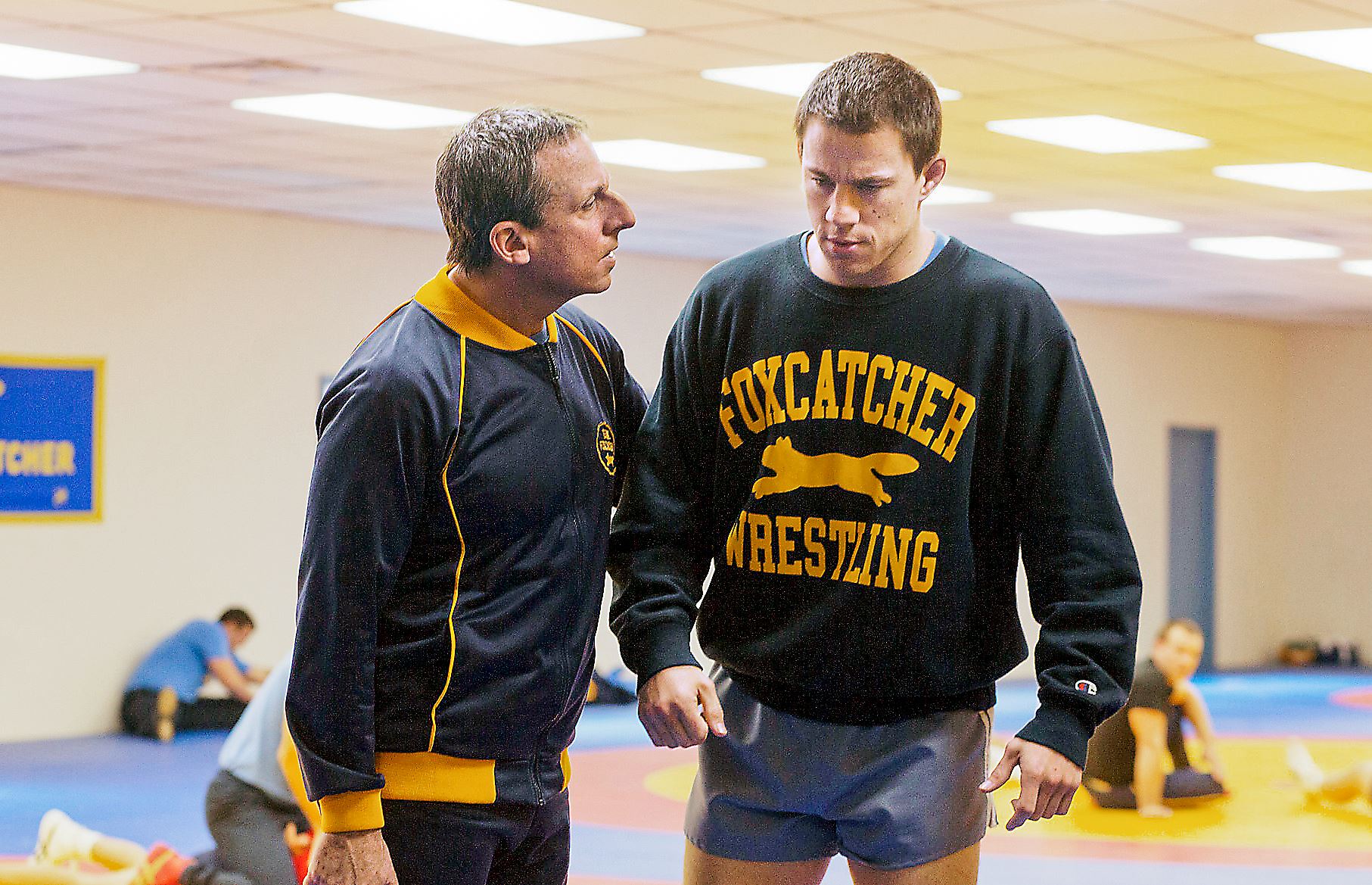 Foxcatcher is a film so disturbing that it reduces audiences to absolute silence. Three exceptional central performances under the tight control of director Bennett Miller bring an unimaginable true story to life in all its ugliness. The facts of the film are borne out by old news reports of the case.

John Eleuthere du Pont was an heir to the Du Pont fortune. As he describes himself, “I am “an ornithologist, conchologist, philatelist, coach, and sports enthusiast.” After seeing the movie, I can add that he was also a mentally ill manipulator of men by virtue of his money.

Du Pont (Steve Carell) lives in a mansion on several hundred family acres called Foxcatcher Farms near his mother Jean (Vanessa Redgrave), a fabled horsewoman who has collected 30,000 show ribbons and disapproves of her son. John hates horses, loves wrestlers. He has built a luxurious training center where he lures aspiring Olympians to live and train in pursuit of Gold. All will wear shirts emblazoned with “Team Foxcatcher.”

His first lure is Mark Schultz (Channing Tatum), already an Olympic Gold Medal winner and a man whose nearly unbroken silence signals a troubled past. Brother Dave Schultz (Mark Ruffalo), also an Olympic contender, will come to Foxcatcher later. The interplay between du Pont and Mark is rich with silence, pause, hidden agenda and finally anger.

When brother Dave accepts du Pont’s invitation to live and train in luxury, we watch the richest man in America posing as head coach of a crew of aspirants in a sport that is, at best, brutal body combat. On the afternoon his mother comes to watch a match, her son John, the paranoid patriot, says: “Mother, I’m leading men, I’m giving America hope.” Her response, as she swivels her wheelchair toward the door: “It’s a low sport and I don’t like to see you being low.” Vanessa Redgrave gives this small moment all the power it deserves.

The sight of a rich man using his power to buy men he wants may seem outdated now, but this is the money/power/sex equation of an earlier time when pretense, at least in public, trumped everything else. Rectitude above all.

Steve Carell is superb in a difficult and challenging role. You are not likely ever to step completely free of the impact of the electric scene when he changes the whole film in one stroke. The degree to which the movie affects an audience is a tribute to both director and cast. You’ll be glad when it’s over but you’ll take the feel of it with you. Just try to shake it.