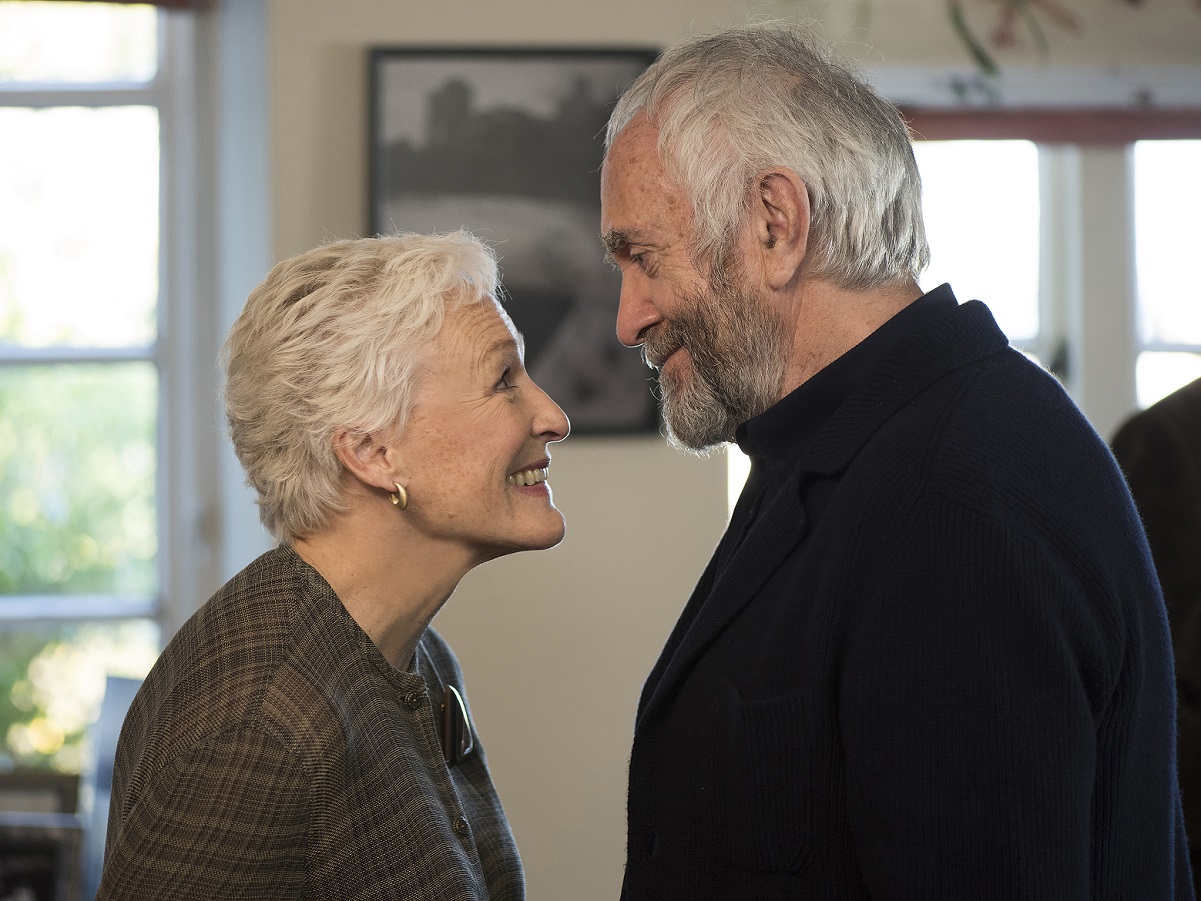 Let’s look first at those responsible for The Wife because every one of them contributes to making this movie the winner that it is. Bjorn Runge directs the script written by Jane Auden from the novel by Meg Wolitzer. Music, filming, script, and performances form a single admirable whole.

Glenn Close creates a superb portrait of Joan Castleman while Jonathan Pryce delivers her husband Joe Castleman with his many strengths and weaknesses. It would have been so easy to make him a straightforward bad guy and that doesn’t happen. He is a man of the 1950s. Annie Stark creates the young Joan and Max Irons is their son Joe, an aspiring writer cringing under the fame and shallow nature of his father.

As we meet Joan and Joe, a phone call announces that Joe has just won the Nobel prize for his most recent book. As they prepare for the victory trip to Sweden, we see that Joan has taken care of him for years – pills, glasses, keys, careful oversight. When they arrive, all attention is showered on Nobel winner Joe while people take obligatory care of Joan who carries her husband’s hat and pills and is told by Nobel assistants, “We can arrange for shopping and beauty treatments.” In this celebration of her husband, neither she nor their son Joe exists.

Flashbacks introduce us to young Joan (Annie Stark) who writes a fine story that is published. In the manner of the ‘50s, she stops writing when she marries in order to be the housewife who forgets nothing. The prevailing culture treats Joe as the successful author and Joan as the non-existent woman. In the era when all decisions were made by men, Joan was a writer who didn’t count. Jump to the Nobel Prize ceremonies decades later and watch Joan, with icy control, hide her anger and resentment.

As the movie winds up to full power, we in the audience are caught in the skill of the moviemakers. The anger – how will this story end? In the hands of this cast, it will end powerfully and disturbingly as a comment on its times. The creation of those times, of the ‘50s, is accurate and disturbing to watch from 2018.

Once again though, the huge power of it comes from mastery in every aspect of the writing, delivery, and acting. Annie Stark as young Joan and Max Irons as son Joe hit us hard with a deep understanding of the rippling effects of fame. Jonathan Pryce is stunning as a man wrapped in the trappings of male accomplishment and cultural worship. Glen Close silences us in awe with a performance that is delivered for the most part through changes of expression that are subtle, quiet and thoroughly deep. The movie touches the various commands of the prevailing culture. As Joan suffers the isolation of a highly intelligent woman followed by implosion and then explosion, the theater is absolutely silent, stunned by Glen Close’s performance.