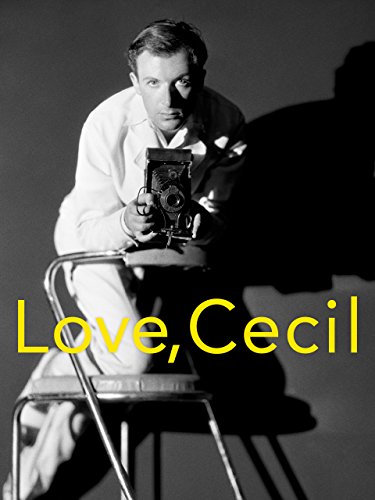 Love, Cecil presents Cecil Beaton, a human enigma who tried throughout his life to figure out who he was until the day he died. This man who achieved worldwide success on many levels never stopped trying to understand himself. During that lifelong search he designed clothes, sets, homes, wrote dozens of books, took thousands of photographs of his famous subjects and became a fashion legend. Director Lisa Vreeland has made a documentary that holds us to every detail.

His work marked an era when the fashion world was far different from what it is today. Whatever Beaton touched became wrapped in folds, flowers, and prints. Cluttered desks, patterned rugs, and intricate wallpapers sprang from his imagination. He created chaos and lived in it.

In a fun aside, he talks about Katherine Hepburn. He saw her as a blank canvas for his work while she refused even to think about being decorated. Years ago, I sat behind her in a New York theater audience and saw just what Beaton describes. She sat anonymously in blue jeans, a wrinkled t-shirt, and a rumpled blazer with a tear down one sleeve. She was a woman who already knew exactly who she was and needed nothing from Beaton. It unsettled him thoroughly to see someone so quietly confident when he was trying so hard to understand himself.

Beaton hated school, never graduated from one, studied theater and photography at Cambridge, failed all exams. In the decadence of the 1890s, he dressed in varieties of costumes that allowed him to become different people. He began to take superb photographs rooted in his belief that a photographer should approach a subject with a point of view of his own.

In 1929 he came to America and stayed until the war ended in 1945. In the era of the American movie star, he photographed Judy Garland, Orson Welles, and Marlene Dietrich. During that time, he took 7000 photos, always looking for beauty in the tragic world of World War II. Even in the despair and hardship of that time, he found beauty for the pictures he took of the wounded in hospitals and of air raid victims everywhere.

From 1948 to 1980 he retreated to the reddish colored country house that he adored. It was his base while he designed for ballet and theater. Always trying to improve himself, he would create an atmosphere and live in it. Clutter – the walls were covered, the shelves filled, flowers everywhere. Simplicity was an alien concept. He loved covering Queen Elizabeth’s coronation where the occasion itself was wrapped in complicated beauty.

Despite his success he said, “I am appalled by the sadness of life.” He found it everywhere. Curious and complex as a person, he lived to create his conception of beauty but never realized fully who he was. He continued taking pictures of himself as he faced a mirror, always asking, “Who am I?” In all his creativity he never found an answer that satisfied him. You will enjoy his complexity.