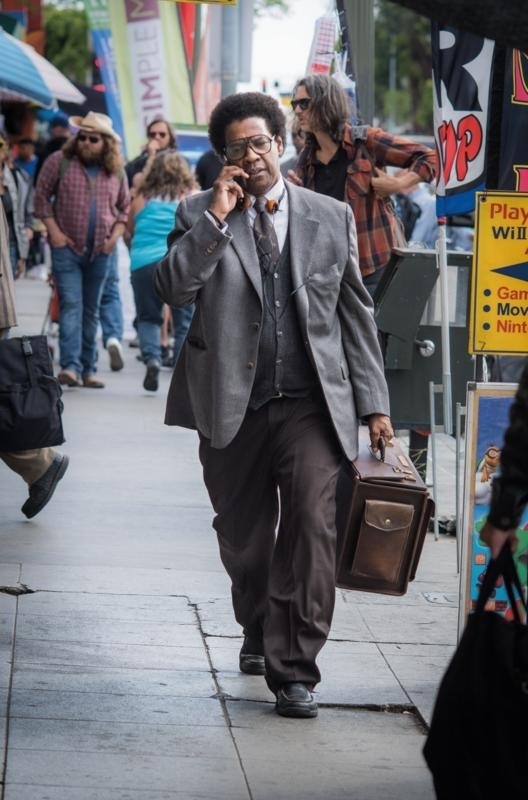 For movie lovers, anticipation and reality are the two states we inhabit in relation to any movie. When the reality turns out to be disappointment, we feel let down for ourselves and sympathetic toward the people who worked hard to make a good film. Roman J. Israel, Esq. was a big disappointment for me. Here’s the why of that.

For twenty-six years, Roman Israel (Denzel Washington) has been the in-office work horse of a two man criminal defense firm while his partner did the public work in the court system. That partner has had a heart attack and lies dying slowly in a hospital.

George (Colin Farrell), an upscale, successful lawyer, steps in to shut down the dingy office where Roman works to redesign the court system that punishes down and out lawbreakers without any effort toward rehabilitation. George hires Roman to address the social justice side of life in a token way in his own big firm.

This is a one man show for Denzel Washington and that is a big undertaking for one actor whose character rarely interacts with others and walks through life talking mostly to himself. His Roman Israel has an encyclopedic grasp of the criminal codes along with dedication to social justice, 1960s style.

For two hours this is what you will see: Roman coming to the office in ill matching old pants, shirt, and sweater or jacket, talking to himself about injecting rehabilitation into the system. His only social interactions unfold with George who hires him for his mastery of the criminal code and with Maya (Carmen Ejogo) who sees he is as troubled as she is. Even when he is with either of those two, he is muttering under his breath in an unreachable inner place. He cannot relax enough to get to know either of them. This is a man so trapped in himself that he can’t respond to the two people who reach out to him.

Roman searches for a job with civil rights in his heart and tears in his eyes as he sees his dream of a grand new era of social reform is of little importance in the world of modern law. Whenever he tries to sell his reform, he is dismissed as a nuisance. He is an eccentric in a world that sees little importance in his ideas. A few light hearted scenes unfold when he violates his own code to stay in a fancy hotel and cavort in the ocean. Can he walk comfortably in the shoes of a rich man?

Writer/director Dan Gilroy creates a character so absorbed in his own dreams that he is of little interest either to on screen characters or to theater audiences. One actor must create this man who is a prisoner in his own mind. He must carry the movie for two hours, and that’s a devil of a load for any actor, even for the grand Denzel Washington.